Sydney Leroux, one of the biggest names in Women’s football has returned to pre-season training nearly six months pregnant.

Sydney Leroux Dwyer, who has 77 caps for the US, currently plays her football in the NWSL with Orlando Pride, who begin their league campaign against Portland Thorns next month.

And ahead of the new season, the former Vancouver Whitecaps and Kansas City striker posted the pictures below on social media and captioned it as:

“I didn’t think I’d be starting off preseason 5.5 months pregnant but here we are!” 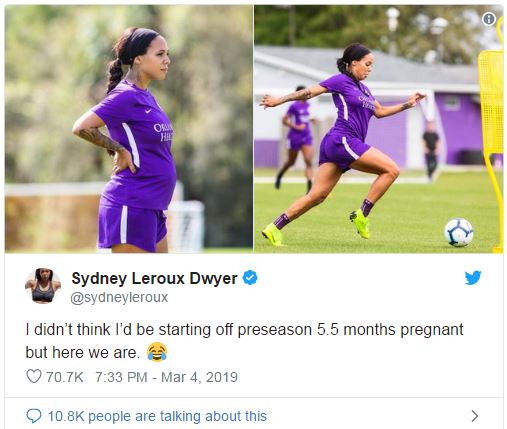 The 28-year-old went on to respond to a question regarding what she could do on a pitch while pregnant.

“I just do non contact stuff. Ball work. Getting touches in.” she said on her official Twitter.

“I don’t put myself in situations where the ball can ricochet or I can get hit. No high intensity running and I listen to my OB (who knows more than people on twitter telling me what I shouldn’t be doing with MY body.”

Many fans have praised Leroux for her bravery. 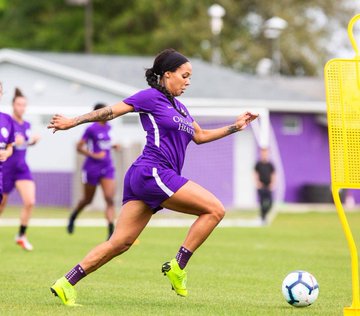 Orlando Pride teammate Alex Morgan revealed her pride, saying: “Proud to be your teammate syd. Can’t wait to get on the field with you.”

While others praised her work ethic. “Sydney Leroux is 5.5 months prego exercising and playing competitive soccer and I can’t even get my ass off the couch.” one Twitter user said.

It comes after she and her husband Dom Dwyer, who plays for Orlando City, had difficulty conceiving their second child.

Leroux announced that she was pregnant back in November 2018.