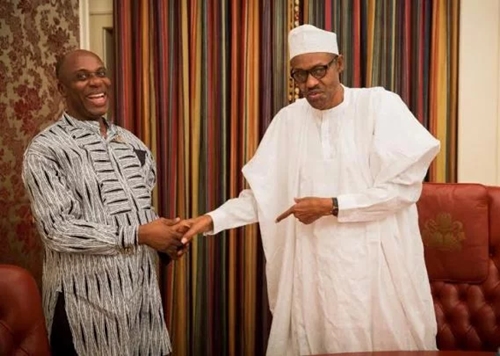 Ministers at the Federal Executive Council (FEC) on Wednesday expressed appreciation to President Muhammadu Buhari for the opportunity he gave them to serve in his cabinet.

At the valedictory session of the council, ministers in the cabinet took turns to narrate the lessons they learnt from the president as members of his cabinet.

Most of the ministers who spoke hailed Buhari for his dedication to hard work.

The Minister of Transportation, Mr Rotimi Amaechi, jokingly thanked Buhari for not converting him to Islam, saying he was misunderstood and criticised for associating with the president.

Amaechi narrated how he was almost chased out of Christ the King Catholic Church in 2014 for supporting the president, whom they alleged was trying to Islamise the country.

“Mr President, let me thank you for not converting me to Islam. I say that specifically because in 2014 when I walked into Christ the King Catholic Church, I was literally chased out of the church as a governor because I was accused of supporting a man whose agenda was to Islamise Nigeria.

“And in Rivers state they began to call me `Alhaji Rotimi Chibuike Amaechi’. I thank you because they have dropped the `Alhaji’ and back to Mr Chibuike Amaechi,’’ he said.

Amaechi said some persons initially thought that the president would be an autocratic leader only for him to turn out to be an “extreme democrat’’.

“I was told in the course of the campaign that you were autocratic and therefore you would not be democratic.

“Most of us are not happy that you have moved from your autocratic nature to an extreme democrat that everything puts to test of the people, to the extent that the people now feel that the only way things can go on in this country is by the rule of law.

“We all know that the rule of law is the beginning and the end of this government. Talking about the financial impunity that we saw before, people were making money without having any productive capacity for that,’’ he said.

On his part, the Minister of state, Petroleum Resources, Dr Ibe Kachikwu, who described his appointment as minister by the president as unique, said he learnt three things from Buhari.

“Three things I have learnt from you which have been very helpful; the first is the power of silence, especially if you don’t have anything to say that is meaningful.

“The second is the power of calm(ness) when the water is turbulent and the third is the audacity of integrity.

“That integrity is what has led us to take some of the bold steps that we have taken that ordinarily Nigerians wouldn’t have forgiven inclusive of the lifting of the price of petroleum products which was essential at the time.

“I thank you Mr President for these lessons and the guidance,’’ he said.

The Ministers of Information and Culture, Alhaji Lai Mohammed, said the opportunity given him to serve was a great one that would never be forgotten.

He commended the president for inculcating a lot of discipline into the Federal Executive Council.

“I want to crave the indulgence of the president to most sincerely thank him for the opportunity he has given me to serve as a Minister of the Federal Republic of Nigeria in the past three and a half years.

“This is a great privilege for anyone to serve his or her country, especially at this level.

“Whatever little achievements one has recorded in the past three and half years wouldn’t have been possible without the support, encouragement and guidance of Mr President and for that I am immensely grateful. I must say that I have learnt a lot from the president’s leadership style.

“Here in this council, you have brought dignity and discipline to the council meetings,’’ Mohammed said.

The Minister of Finance, Hajiya Zainab Ahmed, said she had acquired a lot of knowledge, skills and experience as a member of the FEC under the leadership of Buhari.

She said members were compelled to learn from each other.

She said: “For me every encounter I had with Mr President is like going to school. Today, I’m proud to be graduating with first degree from the PMB’s School of Governance, Integrity, Accountability and Due Process.

“I’m proud to say that I was in the department of EMT that was ably chaired by His Excellency, the Vice-President which we all call silently as workaholic who expects you to be there sometime till 2:00a.m. – he is never tired.’’

The Minister of Women Affairs, Hajiya Aisha Abubakar, thanked God for seeing members of the cabinet through their tenure in spite of the trials they went through.

“The scriptures have taught us that whatever has a beginning must have an end.

“So, today I give thanks to God for seeing us through to the end of this tenure despite all the trials and tribulations, the good and the bad times and the difficult challenges.

“My prayer is that I have served well, compared to the wealth of experience, skills and exposure I have received within this tenure,’’ she said.

The Minister of Agriculture and Rural Development, Chief Audu Ogbeh, commended the president for guiding the team through the successes recorded, especially during the most trying periods.

“Mr President, it is indeed a privilege to have had the opportunity of serving with you.

“I must say that we thank you for selecting us in the first place, we thank the Senate for clearing us, we thank our party for abiding with us and thank you for the lessons you have taught us in these four years which have passed.

“When we came in we quickly ran into very strong headwinds; one of them was the challenge of your ill health out of which the Almighty God delivered us and you.

“The other were two helicopter crashes of the Vice-President, again the hand of God was there to deliver him. Then we lost a colleague of ours, Ocholi, his wife and son in an accident, it was very traumatic.

“We thank you Mr President for the confidence you gave to us; for giving us responsibility without breathing down our throats on a daily basis and allowing us as ministers to use our initiatives and capacities to work.

“Where we failed, we apologise and where we succeeded, we hereby thank you for your leadership and support,’’ Ogbeh said.

The Minister of Education, Malam Adamu Adamu, thanked the president for giving him the freedom to run the ministry without any interference.

“As a journalist who has been very critical of government and perhaps, a nobody, I would never have become a minister but for this gesture of Mr President

“I will like to thank Mr President for giving me freedom. Since I became a minister the president has never asked me to give anybody a contract or directed me to employ anybody and I think this is very rare.

“Sir, both of you have the greatest burden on your shoulders to ensure that this alliance that produced you prevails and is maintained.

“And sir, it will not prevail until something is done because immediately after you what will happen to Nigeria if you are not succeeded by your own type of integrity, then we are going back to something worse than the one you succeeded.

“This is very important, I hope this occupies your mind, the next cabinet and perhaps the party,’’ Adamu said.

He stressed the need for the Federal Government to provide adequate budgetary allocations to the Ministry of Education, saying that the ministry should not get less than one trillion naira annually.

The ministers are to hand over on May 28 in a new directive by President Buhari.