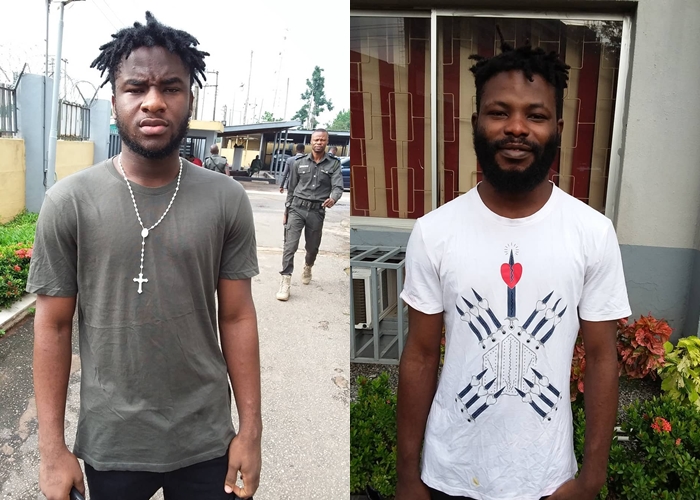 The Economic and Financial Crimes Commission, EFCC, Benin Zonal Office on Monday, June 10, 2019, arraigned the duo of Osaghale ThankGod (a.k.a James Lee Chan) and Ikebodih Kelvin (a.k.a Leo Jeff, Lee Kong) before Justice A. A. Demi-Ajayi of the Federal High Court sitting in Benin, Edo State for offences bordering on fraudulent impersonation and intent to defraud.

Ikebodih Kelvin was arraigned on a two count charge of hoodwinking Vicky Chan, a Chinese lady with messages which she relied upon to part with the sum of Five Thousand Euro for him.

One of the charge reads: “That you, Ikebodih Kelvin sometime between 2018 and 2019 at Uromi, within the jurisdiction of this honourable court did with intent to defraud sent electronic messages which material misrepresent facts to Vicky Chan, a lady in China which messages she relied on and which caused her to suffer financial loss in the sum of Five Thousand Euro and hereby commited an offence contrary to section 14(2) of the Cybercrime (prohibition prevention e.t.c)Act ,2015.”

MORE:  Bash Ali: 63-year-old Boxer claims to eat once every 3 weeks as he prepares to fight Andy Ruiz Jr

Kelvin pleaded not guilty to the charge when it was read to him.

Similarly, ThankGod was arraigned on a one count charge of fraudulently impersonating the identity of Richard Choi through the internet by sending the picture of Susan Chan, an American woman which he claimed to be with the intent to obtain money contrary to Section (22)(2)(b)(1)(ii) of the Cyber crime (prohibition prevention etc) Act 2015 and punishable under Section 22(b)(IV) of same Act. .

Thank God pleaded guilty to the charge when it was read to him.

In view of their plea, the prosecution counsel, F.A.Jirbo asked the court for a trial date and to remand the defendant in prison custody.

However, their defence counsels , Sheriff Okoh and Asemota Peter told the court that they have filed application for bail for their clients.

Justice Demi-Ajayi adjourned both matters to June 19, 2019, for ruling on bail application and sentencing. He also ordered that the defendants be remanded in prison custody pending the determination of the bail application.