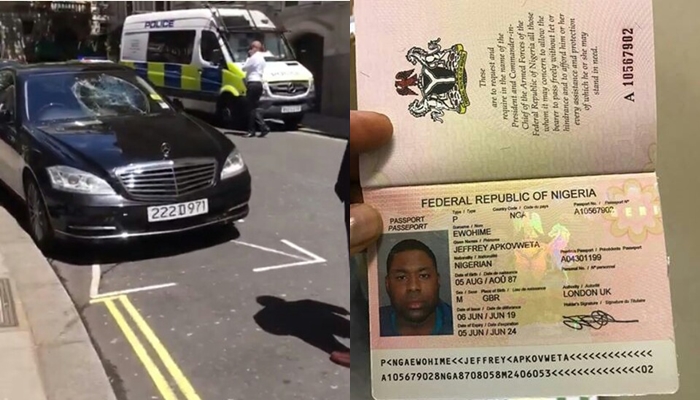 His name is Ewohime Jeffery, from Edo state. He’s been identified as the man who destroyed cars at Nigerian High Commission London over claims of passport delays.

Ewohime Jeffrey destroyed about 5 diplomatic cars in front of Nigeria High Commission in London on Monday over alleged delay to collect his passport after payment of all required fees.

The Nigerian High Commission London in a statement, claimed the man’s passport was ready but he refused to show his collection slip.

Ewohime was subsequently arrested by the police.

The Chief Executive Officer, Nigerians In Diaspora Commission, Abike Dabiri-Erewa, described the action of the 32-year old as condemnable.

In a statement on Monday, Dabiri-Erewa said that such an attitude “was unpatriotic and an unconscionable act of indiscipline.”

She said, “Emohime went to the Nigeria embassy in London on Monday. He had approached the embassy to collect his passport which expired since November 2017 around 2pm and was told that passport collection closes at 1pm.

“He insisted on collecting his passport and was told to bring his collection slip which he could not produce.

“According to reports from the embassy, it would of course be wrong to hand over his passport to him without his collection slip.

“He thereafter left agitated and returned from a nearby hotel to destroy about seven cars, five belonging to the mission, and two to visitors who parked nearby.”

Dabiri-Erewa implored Nigerians abroad to exercise restraint and be good ambassadors of their fatherland at all times in all circumstances.

MORE:  "Any man who kneels down to propose to a lady is a fool", says Pete Edochie