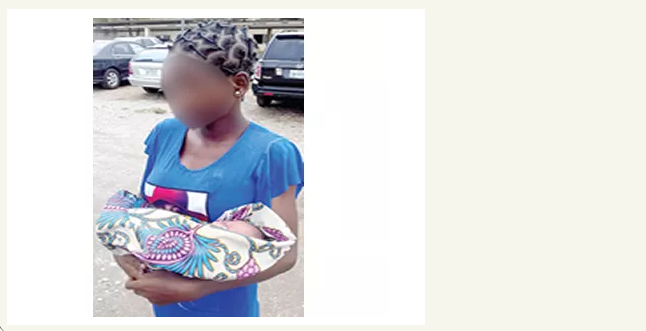 A 15-year-old nursing mother identified as Blessing, has revealed how her 35-year-old elder brother, Frederick, started having sex with her when she was 13, leading to her becoming a mother at 15.

Blessing’s defilement was discovered after she delivered a baby girl at Stella Obasanjo Hospital, in Benin city, Edo State.

Sources said that his brother, Frederick was almost lynched after he collected the baby from his sister at the hospital and attempted to dump it in a refuse dump, claiming that the baby was dead. He was attacked by an angry mob after it was found that the baby was alive and kicking.

Blessing said: “My brother has been sleeping with me since I was 13 years old. Sometimes last year, he sent his wife out of their matrimonial home for about eight months. He sent her out, so that he could have his way with me daily. I had no one to cry to because he is my eldest brother. We lost our mum when I was 10 years old; this made me stay with my brother. He promised to marry me despite all odds. He told me that I should not terminate the pregnancy. He said that once I was delivered of the baby, he would get someone to take the baby and we would become rich.”

Blessing disclosed that the plan would have worked out, but Frederick started acting in a suspicious manner at the hospital, right after the delivery.

She said: “My brother’s movement became suspicious at the hospital after I gave birth. The hospital management had to move me from the women’s ward to a safe place where I was with my baby.”

Frederick told EDOCSO, which took him to police station, that he returned home one day and realised that his sister looked like his wife. He said that he decided to do what husband and wife used to with her. He insisted that he couldn’t recall whatever happened after then.