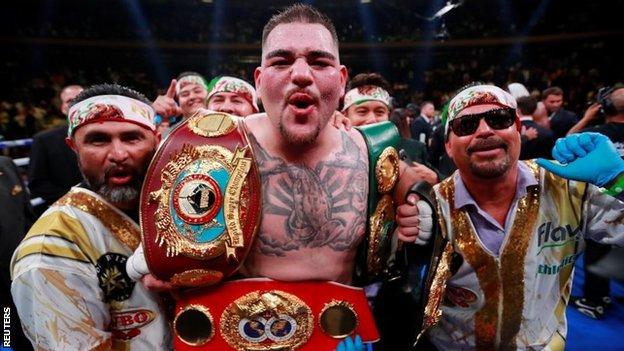 Andy Ruiz Jr has reportedly agreed to face off against Anthony Joshua in Saudi Arabia on December 7, after his purse was increased.

Andy Ruiz Jr originally had reservations about taking the fight in Saudi Arabia, but has now apparently re-worked his contract for the fight.

The Athletic reports that Ruiz will now receive an increase of $2million [£1.6m] for the bout, after he insisted he would not travel to Saudi Arabia and called for the fight to take place in America.

Earlier this month, it was confirmed by Eddie Hearn and Anthony Joshua that the heavyweight world title rematch would take place in Riyadh, Saudi Arabia, on December 7.

Ruiz was contractually obligated to take the rematch, but had reservations about travelling to Saudi Arabia to do so.

Ruiz sent shockwaves through the boxing world on June 1 as he stopped Joshua in dramatic circumstances.

After being sent to the canvas in the third round, Ruiz climbed off the floor to drop Joshua twice in the same round.

The Brit failed to regain his composure, and was then sent down twice again in the seventh round before the referee stopped the bout.

Joshua immediately exercised the rematch clause in the contract, but the pair failed to agree terms on where and when the fight would take place.

On August 10, it was confirmed that Saudi Arabia had been confirmed as the venue, which was controversial with some boxing fans due to the human rights record of the country.

Ruiz took to Instagram to confirm that he wouldn’t travel to Saudi Arabia, and wanted to take the fight back to America.

“I know everybody is talking about the fight and all that but we got real news coming soon,” he said in an Instagram Q&A.

“Of course [I’m taking the rematch] but it’s going to be on our terms; we’re going to bring it back to the United States.”

“Why do you think he’s over there trying to make the fight in Saudi Arabia?

“Like I said, I don’t have any protection over there, so if the United States of America wants to… never mind, I can’t say nothing.

“The fight is going to happen soon.”