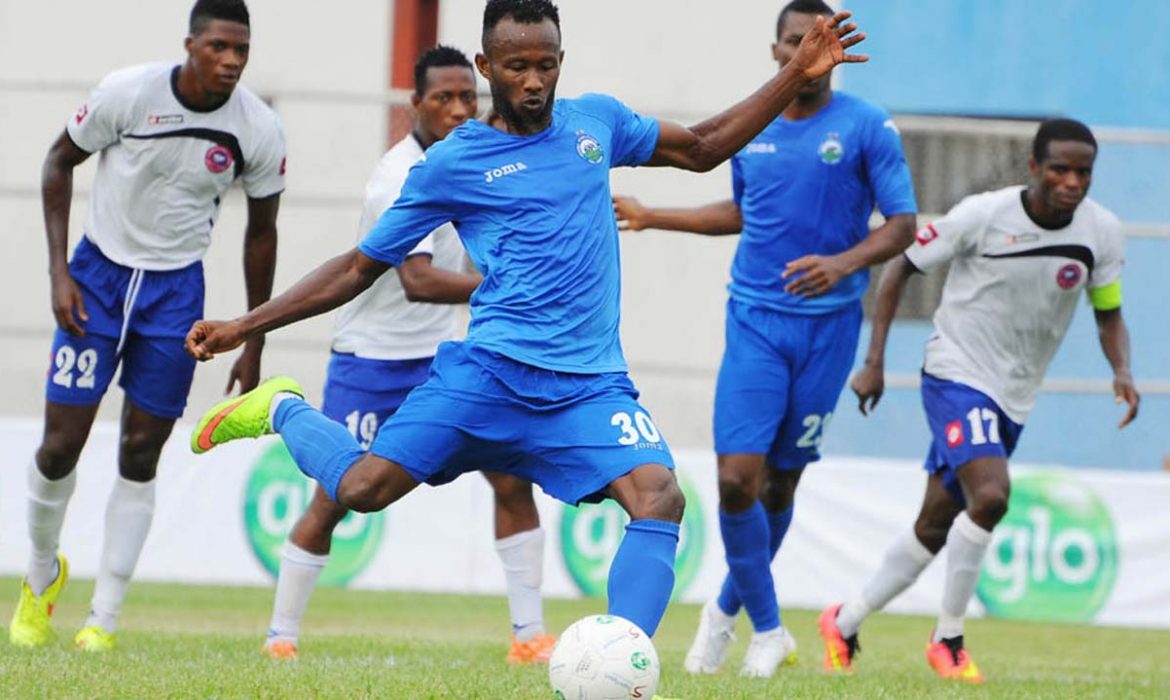 Enyimba International Football Club on Sunday advanced to the second preliminary round of the 2019/2020 CAF Champions League after a 5-0 win over Rahimo FC of Burkina Faso in Aba as Kano Pillars crashed out after a 0-2 loss to hosts Asante Kotoko of Ghana for a 3-4 aggregate defeat.

The Aba-based side qualified 5-1 aggregate after having lost the first leg tie 0-1 about a fortnight earlier.

A brace each from Reuben Bala and Stanley Okorom saw the hosts ease past Rahimo of Burkina Faso in the return leg match.

There were early signs of danger for the Burkinabe champions when their numerical strength was reduced nine minutes after the kick-off, after Zonon Issouf was sent off.

The scorer of the first leg game’s lone goal earned a straight red card by the referee for stamping his foot on Enyimba’s Ghanaian defender Emmanuel Ampia.

Enyimba tried to make their numerical advantage count as they mounted constant pressure on the defence of the visitors.

However, still buoyed by their first leg 1-0 advantage, Rahimo defended stoutly, with virtually every player falling behind the ball time and again with occasional counter-attacks.

Enyimba thought they had gotten the breakthrough in the 24th minute when captain Godwin Abalogun expertly planted his left-foot shot into the top far corner.

But the goal was ruled out by the second assistant referee’s flag, who adjudged Stanley Dimgba who provided the assist to have been in an offside position.

The breakthrough for the hosts eventually came a minute past the half hour mark when Bala fired an incredible free-kick into the far corner past goalkeeper Traore Moussa.

The goal cancelled out Enyimba’s first leg deficit and provided the much-needed soothing relief for the two-times African champions to comeback into their dominant fashion.

The visitors came close to drawing level in the 38th minute when a cross from the left was not properly dealt with by defender Nelson Ogbonnaya.

It provided Cisse Mody with a glorious opportunity to test goalkeeper Afelokhai from close range.

The Nigerian goalkeeper however reacted brilliantly with a fingertip save, pushing the ball over the bar.

The People’s Elephant went into the half-time break one goal up, with both teams tied 1-1 on aggregate.

Before the restart for the second period, Enyimba introduced Okorom in place of Emmanuel Ampia, a decision necessitated by the pains inflicted by Issouf’s stamping on his lower abdomen.

Okorom made an instant impact as he doubled Enyimba’s lead on 46th minute with a cool finish inside the area.

The hosts refused to take their legs off the throttle as they went for more goals, even as the visitors abandoned their defensive approach in search of another away goal.

But it was Enyimba who came close to getting a third goal in the 69th minute.

MORE:  Guardiola to stick with City despite ban

That was when Cyril Olisema forced an audacious save from goalkeeper Moussa who pushed the ball against the woodwork for a corner-kick.

Dimgba put his name on the scoresheet in the 78th minute, cutting in from the left to fire into the top corner.

Enyimba kept surging forward and, with only four minutes left on the clock, Bala got his brace of the night with a ferocious low strike from 35 yards out.

The fourth goal drained the spirit of the hard-fighting Rahimo team as Dimgba equally got his brace on the night and Enyimba’s fifth.

This was when he was set up by Stanley Okorom from a corner-kick.

With the 5-1 aggregate win, Enyimba have sealed a place in the second preliminary round of the 2019/2020 CAF Champions League.

They will now meet the winners of the pairing of Al Hilal of Sudan and Rayon Sports of Rwanda.

On the other hand at the Baba Yara Stadium in Kumasi, Kano Pillars slumped to a 0-2 loss to hosts Asante Kotoko of Ghana for a 3-4 aggregate defeat.

A goal each from Kelvin Andoh and Emmamuel Gyamfi was enough to see Asante Kotoko advance to the second preliminary round of the competition.

Kano Pillars had won the first leg in Kano 3-2.