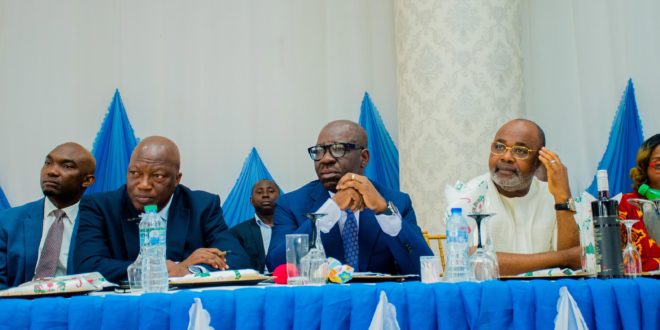 Governor Godwin Obaseki of Edo has met with aggrieved All Progressives Congress (APC) aspirants who participated in the party’s 2019 primary election.

Addressing the aspirants at government house in Benin, the governor said that the meeting was inline with the recommendation of the Theophilus Okoh Committee set up to reconcile the aggrieved members of the party.

Obaseki, alongside party leaders in the state, apologised to the aggrieved party members, thanking them for remaining with the party.

“After reading the Okoh Committee report and watching videos, I really appreciate you all and say we are truly sorry for what you may have gone through during the 2019 primarily election.

“Out of the primaries arose almost 20 court cases of those that claimed they were deprived of the opportunities to contest.

“To build trust, confidence and demonstrate that we truly want to reconcile the aggrieved members of our party, within a week of receiving the Okoh Committee report, we have to call a meeting to talk to our aggrieved members,” he said.

He called on the party members to join hands together with his administration to build the party.

“We are proud of our achievements as a government and people are appreciating our administration for moving the state forward”, the governor said.

One of the aggrieved aspirants, Evbu Igbinedion, called on the governor and members of the party in the state to ensure that females aspirants were given support to win elections.

Another aspirant, Mr Anavberokhai Isah, called on leaders of the party to adopt zoning system to prevent future reoccurrence in the state.

Mr Charles Idahosa, who is one of the leaders of the party in the state, called on the aggrieved members to forget the past and join hands with the governor in developing the state.

Idahosa noted that as the state approached the 2020 governorship election in Edo, the party members needed to support the governor. (NAN)