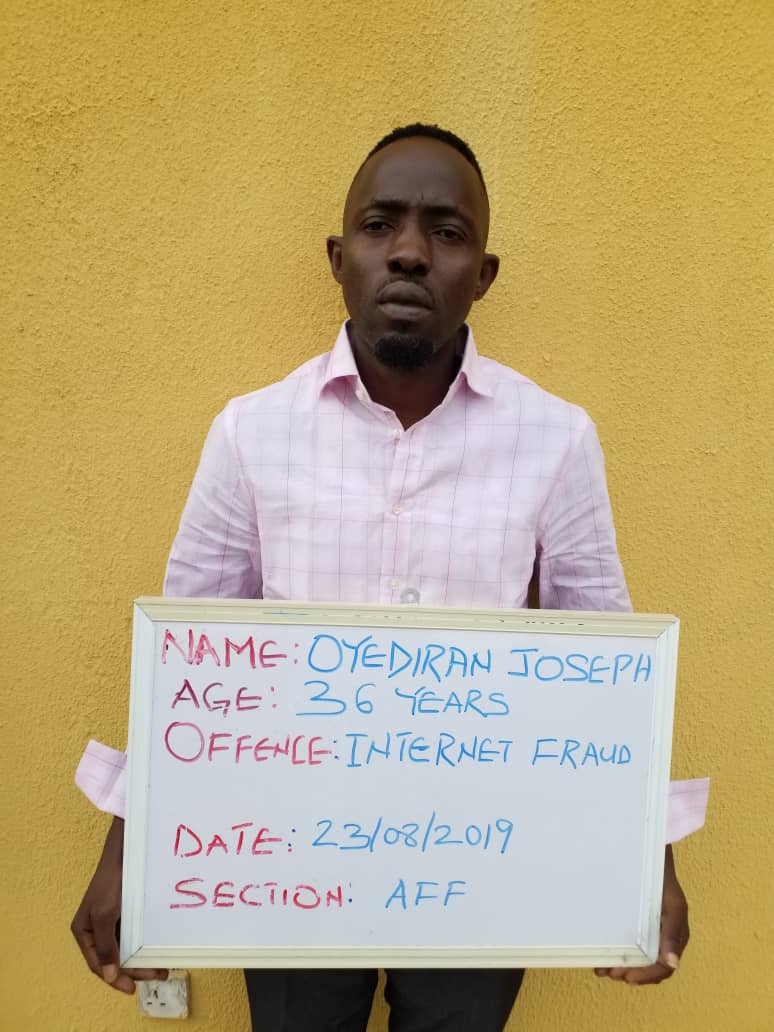 The Economic and Financial Crimes Commission (EFCC) has arrested 36-year-old Joseph Oyediran, one of key wanted fraudsters on the list released by the Federal Bureau of Investigation (FBI).

The commission took to its twitter handle to announce the arrest of the suspect whom they said was the mastermind of a N60 million fraud.

The commission wrote: “One of the internet fraudsters wanted by the FBI, Joseph Oyediran, arrested by EFCC operatives in Ilorin, Kwara State. Head, EFCC Ilorin Zonal Office, Isyaku Sharu, disclosed this at a press conference to give update on EFCC/FBI collaboration against internet fraud,”. 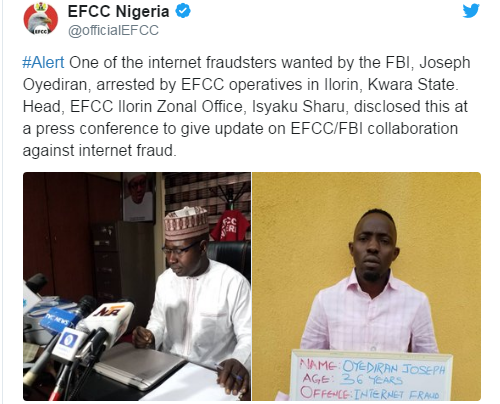 Earlier on Friday, the Zonal Head of the EFCC in Ilorin, Mr Isyaka Sharu while briefing newsmen in Ilorin, said that the commission had been supportive of the Federal Bureau of Investigation (FBI) and other anti graft agencies tackling financial crimes.

“Three weeks ago, the US authority had written to us for assistance in tracking as well as possible arrest and prosecution of two most wanted FBI suspects in Nigeria,” Sharu said.

The News Agency of Nigeria (NAN) reports that the FBI in collaboration with the EFCC had indicted 78 Nigerians in the United States for involvement in internet fraud and cybercrime, fleecing victims of millions of dollars.

Sharu said investigation conducted revealed that the suspect arrested in Ilorin had benefited to the tune of N60 million from the loot through Western Union transfers, having collaborated with those arrested in the United States.

He also said that within seven months of operation, the Ilorin Zonal Office had independently arrested no fewer than 50 other suspected internet fraudsters.

The EFCC official added that the zonal office secured the conviction of 25 others and got forfeiture of their exotic cars.

Sharu said that the money seized from the fraudsters running into millions of naira had been forfeited to the Federal Government.

The zonal head also said that four properties linked to some of the suspects located in choice areas of Ado Ekiti had been seized.

He said the properties, which included a super market and plaza, have a conservative value of between N800 million and one billion naira.

Sharu urged Nigerians to be united in the fight against corruption , saying only this could encourage foreign investment in the economy. (NAN)