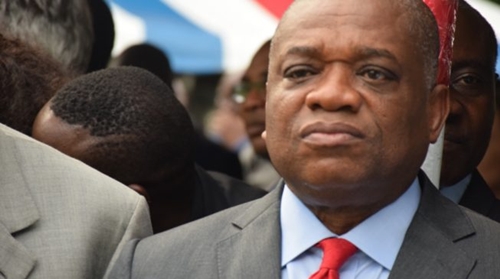 The National and State House of Assembly Elections Petitions Tribunal sitting in Umuahia has nullified the election of the Senate Chief Whip, Orji Kalu, for Abia North Senatorial District.

Delivering its judgment on Monday, a member of the three-member tribunal, Justice I.P.C Igwe, said that the petitioner, Sen. Mao Ohuabunwa, successfully proved his allegation of substantial non-compliance with the electoral guidelines.

Ohuabunwa of the Peoples Democratic Party (PDP) had approached the tribunal to nullify the election of Kalu, who contested the Feb. 2019 election on the platform of the All Progressives Congress.

The petitioner told the tribunal that Kalu’s declaration as the winner of the poll by the Independent National Electoral Commission (INEC) did not comply with the provisions of the 2010 Electoral Act as ammended.

He alleged that INEC excluded some votes during the collation of results, adding that the commission also disenfranchised many registered voters in the constituency.

The tribunal said that since all the parties agreed that elections were peaceful in the entire senatorial district, INEC failed in its duty to ensure that all the unit results were duly recorded in the relevant ward and local government result sheets.

It frowned at the exclusion of over 30,000 votes from Arochukwu Local Government Area, without giving good reason for its action.

The tribunal held that the excluded figure was much higher than the over 10,000 votes, which was the margin of lead between Kalu and the petitioner.

The panel therefore nullified the election and ordered a supplementary election in the affected areas within 90 days.

In a reaction, counsel for Ohuabunwa, Mr Mike Onyeka, hailed the judgment, saying it had increased his confidence in the judiciary.

“I feel a little more confident in the judiciary because what has been decided is the justice of the matter,” he said.

In a related development, the tribunal upheld the election of Rep. Sam Onuigbo for Ikwuano/Umuahia Federal Constituency.

In a unanimous judgment delivered by the Chairman, Justice Cornelius Akintayo, the tribunal dismissed the petition filed by Martin Apugo of the All Progressives Congress (APC) for lack of competence.

Apugo had petitioned the tribunal claiming that Onuigbo, who contested the poll on the platform of PDP was not duly elected.

He contended that Onuigbo did not score the majority of the lawful votes cast and that his election should be annulled, while urging the tribunal to declare him winner instead.

He alleged that election did not hold in some areas, adding that the exercise was marred with irregularities in some parts of the constituency.

Apugo specifically alleged corrupt practices, including mutilation and swapping of results by INEC in favour of Onuigbo.

But the tribunal held that the petitioner failed to prove his allegation that the exercise did not hold in some areas with ample evidence.

It further held that the petitioner failed to prove the criminal allegation beyond reasonable doubt and therefore dismissed the petition in its entirety.

He awarded N200,000 as cost to each of the first, second and third respondents.