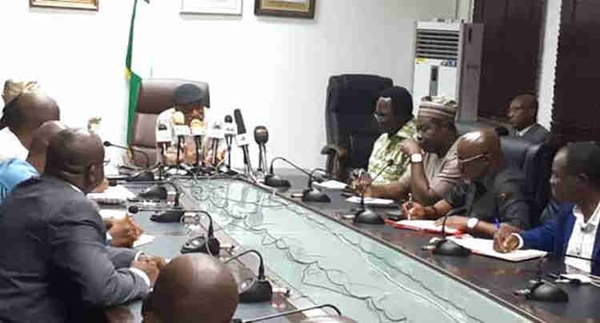 The Federal Government and organised labour have finally reached an agreement on the percentage increase on the consequential adjustment in workers’ salaries for the payment of the N30,000 minimum wage.

The agreement was reached in the early hours of Friday after a meeting that commenced on Thursday.

Minister of Labour and Employment Dr Chris Ngige announced the agreement in Abuja in the early hours of Friday, after a government team he led concluded its meeting with officials of the Organised Labour.

According to Ngige, the consequential adjustment agreed upon are as follows:

The Minister noted that the third category of the country’s wage structure which are military and paramilitary officers were also factored into the agreement.

“Since they are not in the civil service , theirs will be communicated through the appropriate channels. Their percentages of increase is confidential,” he said.

Festus Keyamo, the Minister of State for Labour and Employment, had earlier tweeted from the venue that both parties had reached an agreement, but he did not give details.

The tweet read, “After some delicate negotiations (with both ministers as conciliators), the government and labour have finally reached an agreement on the consequential adjustment of other wages following the implementation of the enhanced minimum wage of N30,000. We are now working on the communique.”

“At about 3am this morning, we signed this Terms of Settlement b/w Govt & Labour which reveals different percentages of adjustments in other wages after the minimum wage adjustment. Those of the law-enforcement agencies have also been done, but are not captured in this Memorandum.”

Similarly, the Trade Union Congress (TUC) confirmed the peace pact in a statement issued by its President Quadri Olaleye, and the Secretary-General, Musa-Lawal Ozigi.

The statement read: “We commend the Head of Service of the Federation, Dr Folashade Yemi-Esan, and her team for their sincerity.

“Though they argued that the government could not afford to meet our earlier demand of N30,000 minimum wage across board because of the economic situation in the country, we made them understand that some people could not be more Nigerian than others.

“If we are tightening our belts, government should also do so.”

Organised Labour and FG had disagreed over the consequential adjustments in salaries that must be implemented across board.