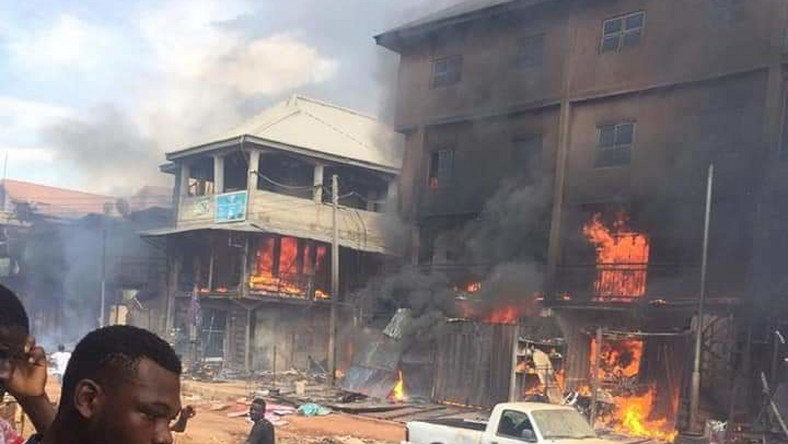 The Federal Fire Service (FFS) has said that a mob stopped its men from getting to the scene of Wednesday’s fire incident at Ochanja Market, Onitsha, in Anambra.

Spokesperson of the agency, Ugo Huan, said this in a statement on Thursday in Abuja.

“The Federal Fire Service received a call about the fire outbreak around 2.00 p. m.

“The control room at the headquarters in Abuja immediately turned out its nearest station at Asaba, Delta State, to attend to the fire.

“Our men immediately headed to the scene but it was not possible to contend with the heavy traffic at the Niger bridge head, coupled with the behaviour of an angry mob who pelted stones at them.

“Thus, it was not possible for the firefighters to get to the scene and fight the fire in such a hostile environment”, Huan said.

Reports say that no fewer than five persons, including a woman and her child, died in the inferno caused by the explosion of a petrol tanker.

Many buildings and shops were also torched in the disaster, according to reports.

The spokesman said the FFS Controller General, Mr Liman Ibrahim, was deeply saddened by the incident, and had expressed his heart-felt condolences to the victims and their families.

“The Federal Fire Service is committed to ensuring the safety of lives and property, with the procurement of new state-of-the-art firefighting trucks distributed to the 12 zones of the service across the nation.

“The service is always ready to respond to fire outbreaks and other emergencies across the nation.

“It is worthy to note that similar situations in recent past in Sokoto, Uyo, Minna, Ibadan, Osun and Lagos were prevented from escalating to a major disaster by the Federal Fire Service.

“The case of Ochanja market was an unfortunate one, as one will wonder why individuals will want to attack firefighters that came to help put out fire that was threatening lives and ravaging property,” he said.

Huan added that “the service will like to use this opportunity to appeal to Nigerians that in as much as the fire service is prepared and committed to saving of lives and property in emergencies, their support and cooperation is highly needed to do that.”

He further explained that the service remained committed to its mandate of saving lives and property of Nigerians and others residing in the country.