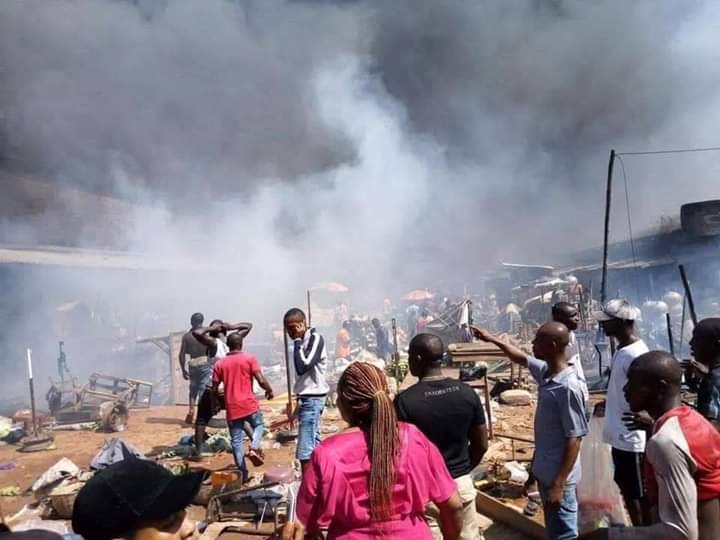 President Muhammadu Buhari has expressed sadness over the tanker fire that claimed lives of a woman and her baby and destroyed property in Onitsha, Anambra State on Wednesday.

Buhari’s reaction came just as three more bodies were recovered on Thursday. Two of the dead bodies were said to be salesgirls. Traders found the bodies about 9am on Thursday in a shop at the Ochanja market.

One of the rescuers, who spoke to newsmen, said he suspected the girls were trapped.

Protesting traders, who stopped government officials from joining in the Thursday rescue, blamed the government for negligence.

The state Governor, Willie Obiano, who visited the market at about 9.20am, could not advance to the actual scene of the inferno due to the large crowd of traders who obstucted traffic flow.

Speaking to newsmen, a victim, Chukwuka Okeke, a neighbour to the woman that died with her child on Wednesday, described the tragedy as unfortunate and avoidable.

He said, “We were in our shops when I got the call that there was fire burning at Upper Iweka. Though we saw smoke going up from a distance, nobody could believe it would extend to this place.

“For over three hours, we perceived the smell of petrol probably mixed with gas from a distance as it flowed through the drainage until the whole thing went up in flames.

“The woman had already rushed out of the shop with her baby but she suddenly went back. She slipped off in the process and fell inside the gutter which was already in flames.

The state governor, it was learnt, had promised to mitigate the pains of those who lost their loved ones and property in the disaster.

A statement by the Commissioner for Information and Public Enlightenment, C-Don Adinuba, read, “Governor Obiano has directed owners of properties affected by the tragic accident, including shop owners, to report at the Conference Room of the Secretary to the State Government on Monday, October 21, 2019, to see how the Anambra State Government can assist them.

“A panel will be set up immediately to determine the cause of the accident and why the firemen could not put out the fire and how the condition of the victims can be ameliorated.”

Meanwhile, President Muhammadu Buhari’s reaction, contained in a statement issued on Thursday by his Special Assistant (Media & Publicity), Garba Shehu, said, “I am profoundly touched by the sight of the charred remains of an innocent mother and her child who are victims of this tragedy. I also extend my sympathies to other victims of the explosion whose houses, shops and other property were destroyed.

“While I express sadness over this tragedy, I must at the same time call for urgent action on the part of those concerned to stem these frequent fatal disasters on public roads.

“Safety precautions and routine maintenance are taken for granted by vehicle owners. I call on the Ministry of Transport, the Federal Road Safety Commission and other stakeholders to urgently address the issue of safety standards in the country, with a view to stemming the embarrassing frequency of these tragedies.”

Commenting on the disaster, the Peoples Democratic Party on Thursday called for an investigation into the remote and immediate causes.

The PDP National Publicity Secretary, Mr Kola Ologbondiyan, in a statement, said, “Indeed, our party mourns. Our hearts ache as our prayers go out to the victims and the families of the deceased, who are now in anguish over their excruciating losses.

“Our party commiserates with the government and people of Anambra State and prays for the repose of the souls of the deceased.”