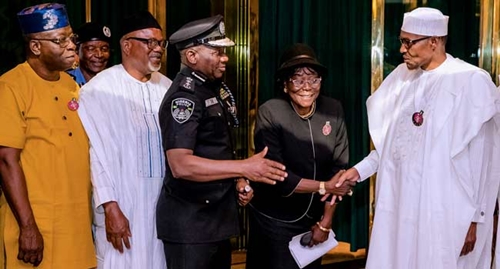 President Muhammadu Buhari has cautioned officers and men of the Nigeria Police Force against harassing young people in their bid to arrest `yahoo criminals.’

Buhari handed down this warning in his keynote address at the opening ceremony of the Conference and Retreat for Senior Police Officers on Monday in Lagos.

The theme of the retreat is “Repositioning the Force for the Challenges of Effective Policing in the 21st Century.’’

Represented by Vice President Yemi Osinbajo, Buhari said that the service the police force rendered was one Nigerians could not do without as it was the closest to the grassroots.

According to him, there are police stations everywhere and the police above every other service represent law and order to the average Nigerian.

“Which is why the police cannot escape public scrutiny and sometimes criticism; Nigerian people old and young want our Police force to be better and to do better; they want to be even prouder of your service than ever before.

“This is why in some of our urban areas we want to see more compliance with the rule of law and in dealing with Nigerians.

“Recently many civil society groups have complained about the arrest of young men and women just because they look successful and are carrying laptops.

“Yes we must apprehend yahoo criminals but we cannot harass young men and women on the streets and in taxis most of whom are merely going about their legitimate businesses.

“There are also cases of extrajudicial killings and injuries; misuse of weapons and excessive use of force by some members of the force.

“ This sort of conduct by a few bad police officers must stop, and it is the duty of you senior and strategic leaders of the Police force to ensure that impunity of any kind is discouraged and punished where it is found.’’

Buhari said that the Nigeria Police force was one of the proudest National assets as it was the largest police force in Africa.

He said that the force had some of the best trained and best-educated men and women.

The president said that Nigerian policemen had served everywhere locally and internationally with outstanding results.

“Locally in the past one year alone the Nigeria police have between January and this month arrested over; 2,348 Armed Robbery suspects – 1,412 Suspected kidnappers 694 Murder Suspects, 1,513 Cultists safely rescued 826 Kidnap victims, recovered-1,660 firearms and 1612 vehicles.

“In the course of duty so many have paid the supreme price; while fighting off robbers, kidnappers and other criminals many have been maimed for life.’’

He said that special training was being organized for the Special Units of the Police including the Police Mobile Force, Special Forces, Counter-Terrorism Unit, Anti-Robbery detachments, Anti-Kidnapping Squads, and the Criminal Investigation.

The president said that resources had been put into acquiring and deploying electro-muscular disruption technology-based weaponry which is commonly known as Taser or Stun Guns for low-risk police operations.

According to him, the Federal government has facilitated the passage of the Police Trust Fund (Establishment) Act, which has since assented.

“ I understand that the Minister of Police Affairs is now working closely with the Inspector-General of Police to ensure the smooth take-off of the Fund.

“Furthermore, our effort in embracing community policing as a national security strategy is also informed by the need to close the trust gap between the Police and the citizens, build partnership and strengthen collaboration with communities towards addressing prevalent security threats.

“We have made steady progress in this regard. An important part of the strategy is to recruit new personnel from within local governments and ensure that after training such new police officers remain within their local government. Policing must as much as possible be local.

“It is also within this context that the Federal government approved the recruitment of 10,000 junior cadre officers into the Nigeria Police on an annual basis.

“Beyond this, we shall continue to support the leadership of the Nigeria Police in their personnel capacity development programs at the various Police Training facilities.

“All these internal security initiatives will, of course, remain ineffectual if the personnel at the strategic level of policing in Nigeria lack the optimal professional capacity to drive the strategies,’’ he said.

Earlier in his welcome address, the Inspector General of Police (IG-P), Mohammed Adamu, said that constant engagement of strategic managers and consistent training and retraining of personnel was crucial for effective policing.