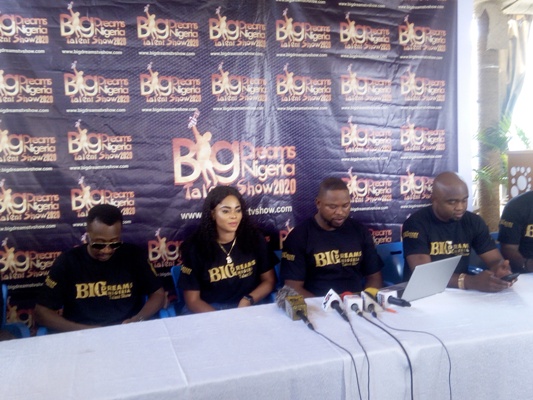 “Big Dreams Nigeria”, a talent hunt show geared towards discovering and developing young talents in acting, music and stand-up comedy across Nigeria, is set to debut, its organisers said.

Mr Kingsley Amafibe, Project Director of the Big Dream Nigeria Talent Show, stated this on Wednesday at a pre-event interactive session in Abuja.

According to Amafibe, registration for participation is free, as the initiative is to offer talented and passionate youths a platform to express themselves and be discovered in the creative industry, and thereby reduce unemployment rate.

“Registration will be opened on Nov. 10, for our budding talents in music, acting and comedy nationwide to participate.

“We shall hold auditions in 11 states, including the FCT, Lagos, Jos, Benin, Kaduna, Enugu and Calabar, among other cities across Nigeria.

“A total number of 45 youths, 15 each for acting, music and comedy categories, will be selected for the grand finale in Lagos,” he said.

The Project Director further explained that the 45 selected young talents will be camped for mentoring and training for five weeks, as they compete for the grand prize.

He added that while in camp, professional filmmakers, artistes and other stakeholders will train and share experiences with the young and at the end, movies and music produced by them will be screened.

According to him, the 45 contestants will be reduced on a weekly eviction process, and then the last three persons standing will be announced as winners on May 10, 2020.

“The three contestants who make it to the finale will be awarded N2 million each to enable them build a career in their area of choice in the entertainment industry.

“This is in line with the essence of the project, to create job for young people in the entertainment industry, thereby reducing the number of unemployed Nigerians, and ultimately make them employers of labour .”

He noted that the project was being organised in collaboration with relevant showbiz promoters, organisations and key industry players.

Mr Uzee Usman, a filmmaker and member of the organising team, said talented youths discovered from the programme will be given acting roles in Nollywood films.

Other members of the team, Mr Tunde Tdot of the popular Styl-Plus music group, and the veteran stand-up comedian Shortcut, said they would provide mentoring opportunities for talents to be discovered from the show.