Boxing legend Mike Tyson swiftly shut down the idea that Deontay Wilder would stand any chance of beating him in his prime.

The 34-year-old WBC champ once boasted that he could have KO’d a prime version of ‘Iron’ Mike in the squared circle.

TMZ decided to approach the ‘Baddest Man on the Planet’ about Wilder’s claims after he was leaving Mastro’s Steakhouse in Beverly Hills.

And when the question was put to him, the 53-year-old simply responded: “I don’t think so.”

The grinning Tyson was swiftly whisked away by his driver after he ruled out Wilder’s chances against him.

Boxing fans have also entered into a heated debate over who would emerge victoriously from a clash between the two feared punchers.

The 54-year-old boxing legend argued that the ‘Bronze Bomber’ has never been in “there with someone that ferocious [and] who truly wants to break his ribs with every punch.”

“My thoughts are that it’s easy to talk until you actually get in the ring. 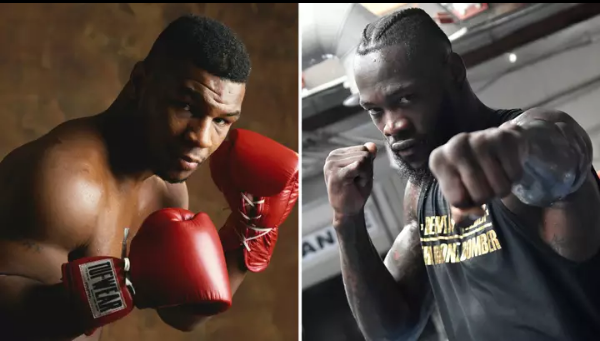 “I like Wilder, but he’s never been in there with someone that ferocious [and] who truly wants to break his ribs with every punch. I don’t see it!

“I love Wilder’s confidence [and] you need that to sit atop the heavyweight division.

“He’s hungry and shows up in probably best shape in the division, but there are levels to it and he’s still adding to his arsenal.

“My best advice to the entire crop of young heavyweight champs is to focus on being the best of YOUR era!

“Out of respect and reality. It’s unprovable.

“Of course, people asked but I found no need to speculate or compare myself to my idol Muhammad Ali or any other of the past greats.

“History will decide your place among the all-time greats, so go out there clean up the division and defend your title.

“Reign supreme and your work will speak for itself.”

Wilder has also been critical of Tyson before after he slammed the boxing legend’s record during an Instagram Live session in 2017.