Boko Haram insurgents have killed Lawan Andimi, chairman of the Christian Association of Nigeria (CAN) in Michika local government area of Adamawa state.

Andimi was abducted early January when the insurgents attacked his village.

A source who confirmed the incident to TheCable said Andimi was killed by his captors on Monday.

Days after his abduction, the clergyman, in a video clip, asked Ahmadu Fintiri, governor of Adamawa, to rescue him.

“I have never been discouraged, because all conditions that one finds himself …is in the hand of God. God who made them to take care of me. So, the summary of my speech; I am appealing to my colleagues, reverends, particularly my president, Reverend Joel Billy who is a strong man, a man of compassion and man of love. He can do all his best to speak to our governor, Umaru Jibrilla (Fintiri) and other necessary agents for my release here,” he had said.

On Christmas eve, a faction of Boko Haram affiliated to the Islamic State, killed 11 Christian captives in Borno, and said the action was taken to avenge the deaths of Abu Bakr al-Baghdadi, the late IS leader, and Abul-Hasan Al-Muhajir, its spokesman, who were killed in Syria in October.

Four abducted aid workers of the Action Against Hunger, an international non-government organisation, were also killed by the Islamic State in West Africa Province (ISWAP) in December.

The insurgents said the aid workers were killed because of the breakdown of talks with the federal government.

It is not clear why Andimi was killed as his captors are a yet to take responsibility. 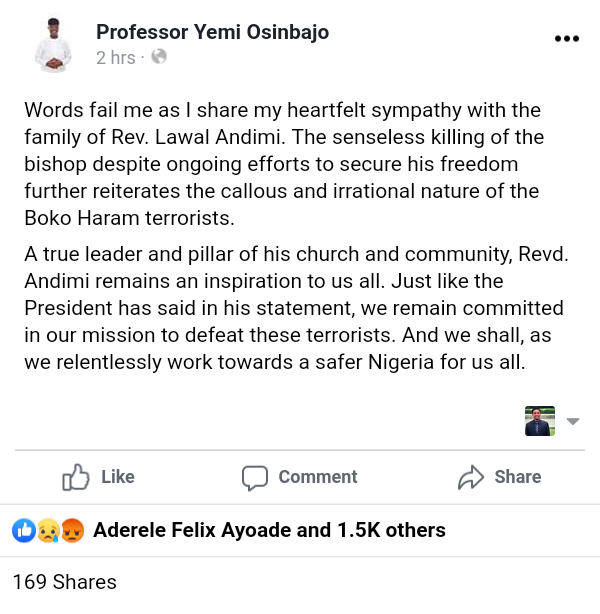