The meeting is the first NEC for the year and the first for the newly sworn-in Governor of Imo State, Hope Uzodinma.

Uzodinma, the newest member of the council, was the cynosure as he exchanged banters with other governors.

Nigeria’s constitution provided that the vice president should be the Chairman of NEC.

The monthly NEC meeting deliberates on economic planning efforts and programmes of the various levels of government in the country.

NEC comprises the 36 state governors, the Governor of Central Bank of Nigeria (CBN), Minister of Finance, Secretary to the Government of the Federation and some other government officials whose duties hinge on the economy.

I feel excited being part of National Economic Council — Uzodinma 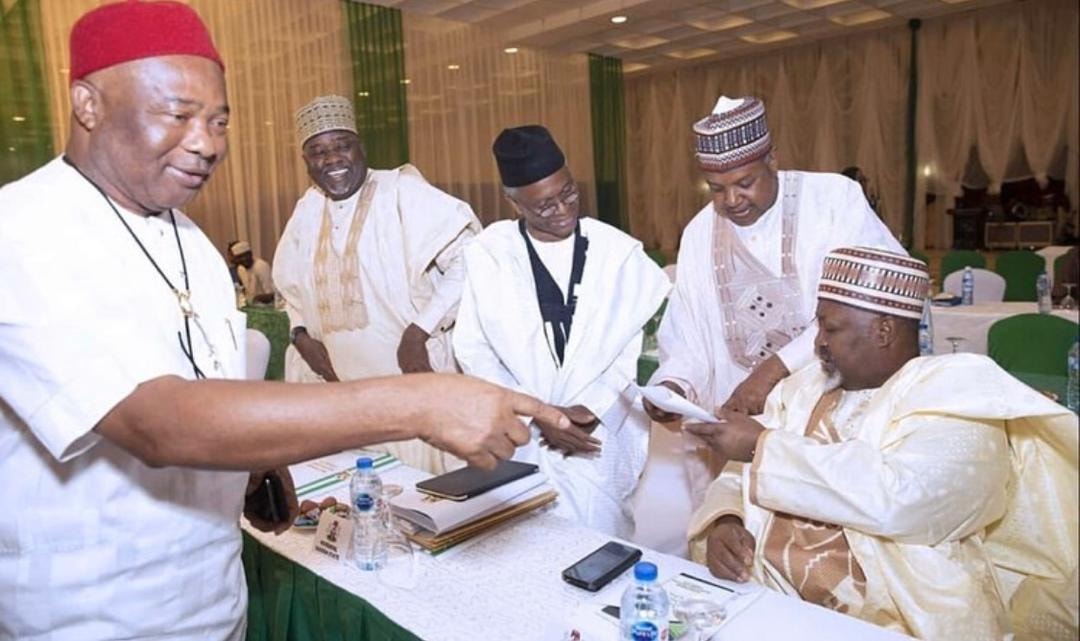 The Newly sworn in Imo Governor, Chief Hope Uzodinma, says he feels excited and encouraged being part of the National Economic Council (NEC).

Uzodinma spoke with State House Correspondents on the sidelines of the NEC meeting presided over the Vice-President, Prof. Yemi Osinbajo, at the Presidential Villa, Abuja on Thursday.

He was attending the meeting for the first time.

Uzodinma was on Jan. 15 sworn in as Governor following a Supreme Court judgment that nullified the election of Chief Emeka Ihedioha and declared him the winner of the governorship election in Imo in 2019.

The governor said he would offer his best in the course of administering the state.

“I feel excited being part of the engine room where national development is being planned and I am encouraged.

“The people of Imo State should expect the best from me in terms of my vision for the state as contained in my manifesto followed by the broadcast which I did two days ago.

“Of course, all those policies have been well articulated; researched upon; and by the grace of God, if accomplished, will take us to the next level.’’

He said that government was a continuum and that he would continue from where he met the government.

Uzodinma added, however, that in the process of governance, if there were issues that required to be probed; he would not hesitate to do so.

“So, there is nothing really new; the process of national development is a collective thing.

“So, from one point or the other point, you will continue to participate and be contributing your own quota,’’ the governor said.

He said that he would gradually reconcile all the groups with a view to creating stability in the polity.

The Emir of Kano, Malam Muhammadu Sanusi, also fielded questions from newsmen and said he was at the meeting to make a presentation to NEC on behalf of the Nutrition Council of Nigeria.

Sanusi said the presentation was aimed at drawing the attention of the governors to emergency Nigeria was facing on nutrition.

“The seriousness of the nutrition problem is basically responsible for 53 per cent of the infant mortality problem we have in Nigeria.

“The very high rate of malnutrition among children and women and the need to set up structures and have proper funding and enlightenment and awareness to address these problems and the reception was very positive.

“The governors recognised the seriousness of these problems; many of them have seen the numbers; they are alarming,’’ he said.

The monarch said that members of the council had committed to prioritising the problem in their budgets and in their policies. (NAN)