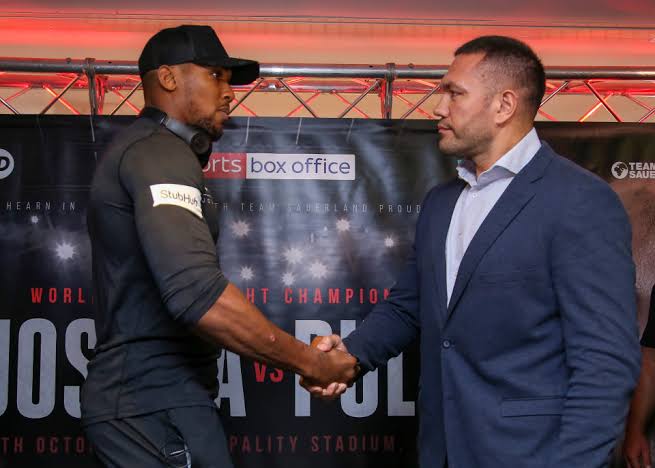 Promoter Eddie Hearn has confirmed Pulev is the ‘front-runner’ to face Anthony Joshua next and said the fight would likely take place in the UK or in Nigeria.

‘Kubrat Pulev is the frontrunner,’ said Hearn. ‘I think we’ve established that the IBF mandatory was called before the WBO mandatory.

‘Pulev is the fight for me, and more importantly for the boss, AJ, he wants it here. He’s boxed now in Saudi Arabia for his last fight, he’s boxed in New York before that.

‘For me, it’s time to come home. The bad news is that Kubrat Pulev wants as much money as possible for this fight and he realises there’s more money in Istanbul, or Saudi Arabia, or the Congo, or Nigeria, but AJ is going to call the shots.

‘He may end up having to let the Pulev fight go, if he won’t fight in the places that we’d like him to fight and that is in the UK.

‘We’re looking at dates at the end of May to the beginning of June for the Pulev fight. Everywhere is in play.

‘The Principality Stadium has got some dates for us, so in an ideal world, AJ’s next fight will be Kubrat Pulev in London, but this is far from an ideal world, particularly in the boxing game.’