World heavyweight boxing champion, Anthony Joshua was on a short visit to his birthplace of Sagamu in Ogun State, Nigeria, on Wednesday.

The British boxer who regained his heavyweight titles from Mexican Andy Ruiz last December in Saudi Arabia was spotted at the Palace of the Akarigbo of Remo in Sagamu at about 1pm.

Anthony Joshua had said in a post “See you all soon” while thanking Nigerians for their support after defeating Andy Ruiz Jr. in a rematch in Saudi Arabia last year.

On Tuesday afternoon, picture of Anthony Joshua trended on the social media with him displaying his new Nigerian NIM identity card. He was flanked by two unnamed officials.

There was also no mention of where he was registered and presented with the identity card.

That first created the speculation that the heavyweight boxer was likely in the country on a private visit.

On January 18, Anthony Joshua presented his World heavyweight boxing belts to President Muhammadu Buhari in the United Kingdom. Joshua’s visit to Buhari was well celebrated in the local media with the picture of the gangling boxer fully postrated before the President in typical Yoruba son greeting of an elder.

The picture also trended on the social media for days with thousands of comments eulogizing him for not forgetting his Yoruba ancestry despite fighting as a Briton.

Anthony Joshua was born in Watford to a Nigerian mother, Yeta Odusanya and a British father of Nigerian and Irish descent, Robert, in 1989.

He made his debut alongside his cousin, Ben Illeyemi, who is also a professional boxer, in 2013.

According to reports, Joshua spent some of his early years in Nigeria and was a boarding school student at Mayflower School in Ikenne.

He was said to have returned to the United Kingdom when he was 12 years old.

His father’s family name is popular in Ijokun, Sagamu area of Ogun State.

See photos from his visit to his hometown in Sagamu, below: 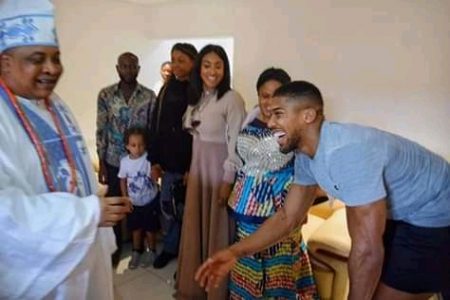 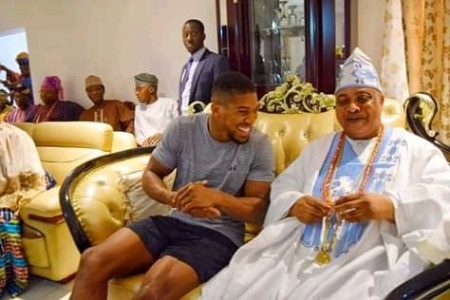 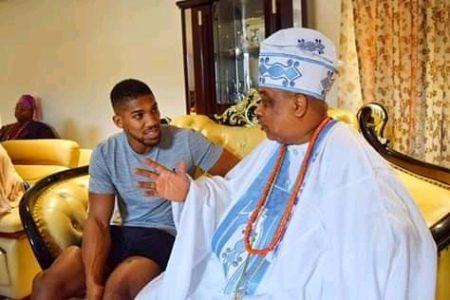 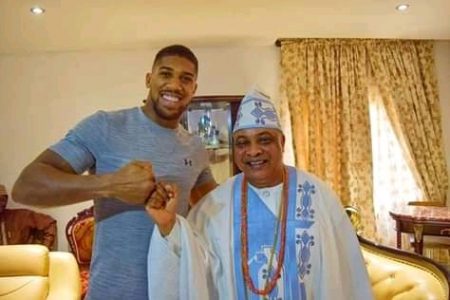