Oshiomhole gave the explanation while speaking to the State House correspondents at the Presidential Villa in Abuja on Friday after introducing Ajimobi to President Muhammadu Buhari as the new replacement for the Minister of Trade and Investment, Otunba Niyi Adebayo, as National Deputy Chairman (South).

The party Chairman was responding to a question on why Ajimobi was still given the position, despite the protest by the Ekiti State chapter of the party, where the former occupier of the office represented. 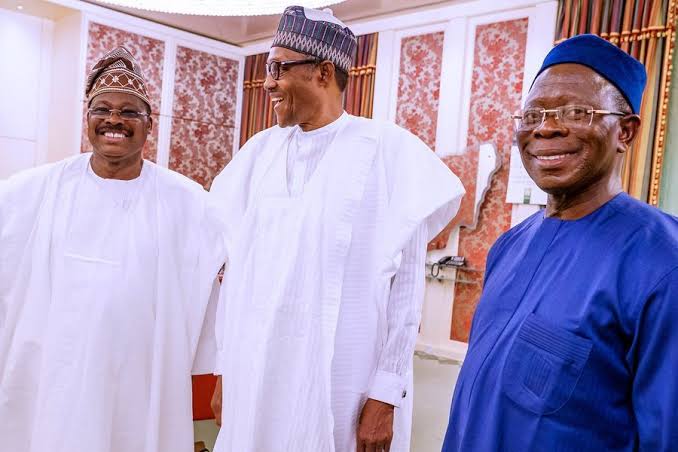 .According to Oshiomhole, the majority of states in the South-West settled for the choice of Ajimobi, adding that the protest by one of the six states, Ekiti, was not enough to stop the former governor.

“We have six states in the South-West where the seat was zoned. Ekiti is the only one opposing it. As we always say, the majority had their way and the minority had their say. That’s all”, he said.

Speaking about his mission to the Presidential Villa, Oshiomhole said he had come to introduce the new National Deputy Chairman (South) to the President, adding that Buhari was “excited” to receive Ajimobi and saw him as a man with the wealth of experience to contribute to the growth of the APC.

“I came to present or reintroduce Senator Ajimobi, whom the South-West nominated into the position of Deputy National Chairman, to M.r President. He has filled the vacancy created when Mr President appointed Adebayo as a minister.

“The President was excited and delighted to see him as one who will bring his wealth of experience to bear on the party”, he said.

Meanwhile, the APC National Chairman commended President Buhari for some of the measures the administration had taken during the week to fight the impact of an outbreak of the novel coronavirus (COVID-19) pandemic on Nigerians.

He cited the reduction of the pump price of petrol from N145 to N125 and the travel restriction on 15 high-risk countries as some of the measures deserving commendation.

“I commend the President for the drop in price and we expect people to pass it down to the cost of transportation”, he said.

If you have a story for our news team or firsthand information or pictures about a news story to pass to us, send it via WhatsApp +2348077609539 or email us at contact@asbnews.ng