Anthony Joshua didn’t think Tyson Fury would be an unbeaten WBC heavyweight champion in 2020 while watching Fury develop earlier in his career.

The British superstar considers Fury’s story proof, though, that some boxers simply need more time than others to maximize their potential. Fury upset Wladimir Klitschko to win the IBF, IBO, WBA and WBO titles in November 2015, yet he produced perhaps his most impressive performance in his last fight.

Fury didn’t just defeat Deontay Wilder to win the WBC title, he overwhelmed Wilder with pressure and physicality in their rematch February 22 at MGM Grand Garden Arena in Las Vegas. The 31-year-old Fury (30-0-1, 21 KOs) dropped Wilder (42-1-1, 41 KOs) in the third and fifth rounds, and stopped him in the seventh round, when Wilder’s assistant trainer, Mark Breland, threw in the towel.

“He has surprised me, but I believe that every fighter needs time to develop,” Joshua told Chris Mannix during the Sports Illustrated boxing podcast. “And I say like Tyson Fury’s been professional now like what … 11 years, going on 12 years. He needed so much time to develop, you know, and he’s finally got to a stage where he’s found that straw of confidence. You know, so congratulations to him. So, I just reflect [on] that, and that’s why, as you said, that bird’s-eye view – when I was studying these guys, Tyson Fury, when I was coming through, and I looked at my career and I said, ‘Whoa! I’ve done what it took him 10 years to do in three years. Imagine where I’m gonna be in 10 years. 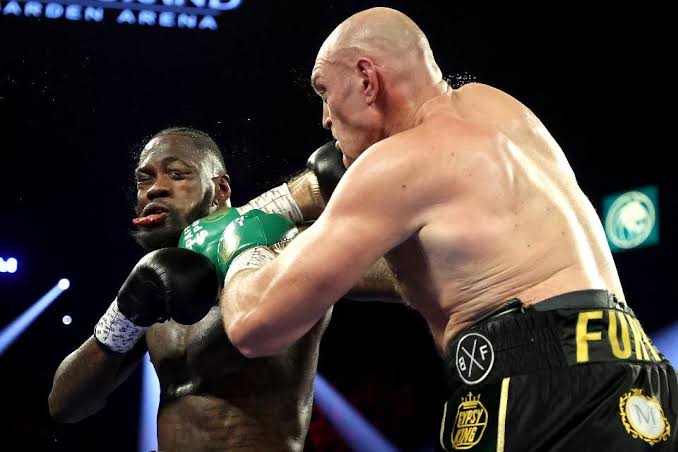 “So, I keep on moving through, keep on moving through, and I get that I had my little issue with the Ruiz thing last year. But as I always say, another six years from now, when I’m where Tyson Fury is, in time to time, I should be unstoppable because experience and wisdom is one of the greatest teachers. And that’s what I’m gathering now, is masses of knowledge about the boxing industry.”

The 30-year-old Joshua’s “little issue with the Ruiz thing” resulted in the then-unbeaten champion getting knocked down four times on his way to a seventh-round, technical-knockout loss to Andy Ruiz Jr. last June 1 at Madison Square Garden in New York. Joshua out-boxed Ruiz (33-2, 22 KOs) in their 12-round rematch, won a unanimous decision and took back his IBF, IBO, WBA and WBO championships December 7 in Diriyah, Saudi Arabia.

In his next fight, Joshua will make a mandatory defense of his IBF title against Bulgaria’s Kubrat Pulev (28-1, 14 KOs). They were supposed to box June 20 at Tottenham Hotspur Stadium in London, but their fight was delayed indefinitely due to the COVID-19 pandemic.

England’s Fury and Alabama’s Wilder are tentatively set to fight a third time October 3 at an undetermined venue.