Nigerian dancehall singer Cynthia Morgan has revealed issues she had with her former record label owned by Jude Okoye. The singer reportedly going through depression says she lost all royalty, her stage name, Instagram account, and access to her VEVO account.

She revealed this on an Instagram Live chat on Saturday. Cynthia Morgan who now goes by the stage name Madrina alleged that she was not allowed to use her popular stage name which is also her real name following exit from Jude Okoye’s Northside Records.

“Cynthia Morgan call me… “Tell Cynthia I got an anthem for her… I’ll record my verse now,” he tweeted.

Meanwhile, Peter Okoye, brother and former P.Square singer who was also in the record label has also reached out to Cynthia Morgan.

“And some people thought I was stupid when I made the right decision. My dear C Morgan! it’s never too late to be what you might have been. God will surely see you through and carry you through the storm. Keep believing”

Peter Okoye revealed that he tried giving Cynthia Morgan a contract after he left the P.Square group.

“My dear C Morgan, The decision I made 3yrs ago was never about the firm(fame), money or power! It was for my FREEDOM! Sad you rejected the contract I gave u. Just because they made you see me as the bad egg. I pray you to understand that God has a purpose for everything. Never give up”

“The Truth shall prevail. God will surely see you through, C Morgan… G’night” he tweeted.

Cynthia former manager, Joy Tongo has claimed that the singer is owing over $30,000 and seeking for self-pity.

“Cynthia Morgan this is 2020, we haven’t forgotten all your dirt ! Internet does not lie , emails does not lie and much more . I am coming for you ! All the dirt you did to I and Jude and others you must pay this time around . Is over 4 years and you are still talking trash!” he wrote on Twitter.

MORE:  Singer Tiwa Savage says she might go naked in her next video
MORE:  Kanye West officially now a billionaire according to Forbes

“Cynthia Morgan you are advised to let people know the truth , else we would tell them the truth.

“PS: Your former management,” she added. 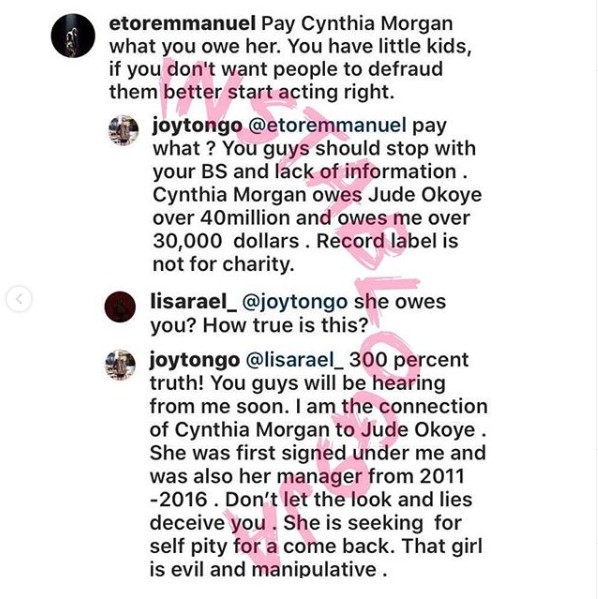 Meanwhile, in a live interview with Instagram influencer Tunde Ednut, Jude Okoye addressed some of the allegations made against him by the dancehall singer who accused him of shipwrecking her music career.

“I never took that name from her. I don’t have that power.”

Jude Okoye added the songstress still had access to her social media account two years after leaving the label. He also stated that the contract Cynthia Morgan had with him (Northside Records) expired in 2017 when responding to a question on if Cynthia Morgan was free. And he affirmed that Morgan indeed owed him over 40 million nairas.

During the course of the interview, Jude Okoye said that he will make the contract available to the public.

“Why are people not asking questions; how come this girl has been down this so long and not even one colleague came up to her rescue? Not rescue as in giving her money or sponsoring her. Rescue as in identifying with her.”

He also said Cynthia burned all the bridges he built for her and stated Cynthia Morgan once questioned his value in her life.

-Reacting to May D claims-

Jude Okoye also addressed the allegations made by Akinmayokun Awodumila better known by the stage name May D. Following the allegations by Morgan, May D whose brief stint with the defunct PSqaure ended in 2012, stated that while he was with the label he was poorly treated. He claimed that he slept on a carton in the boy’s quarters which he shared with their driver.

In his reaction to the allegation, Jude said he spent over a hundred thousand dollars on May D. According to Jude, trouble began after he gave May D a contract and the singer came back after 2 weeks stating that there were no incentives in the contract.

Jude said May D had demanded a car and an apartment in Lekki despite the fact that the singer was still up-and-coming and had not done any shows.

Jude also chipped in on the bad blood between him and Peter. He stated that the only reason he decided to speak up on the Cynthia Morgan allegations was that Peter had involved himself.

Jude Okoye stated that the reason PSquare broke up was that Peter didn’t want his (Jude) involvement in the group. When asked if he could bring back the group together again, Jude said no and that “there is nothing humanly possible for me to do to bring Psquare back”.