Kylie Jenner is not a billionaire, and fabricated financial documents to support the false claim that she was, according to a new Forbes report. 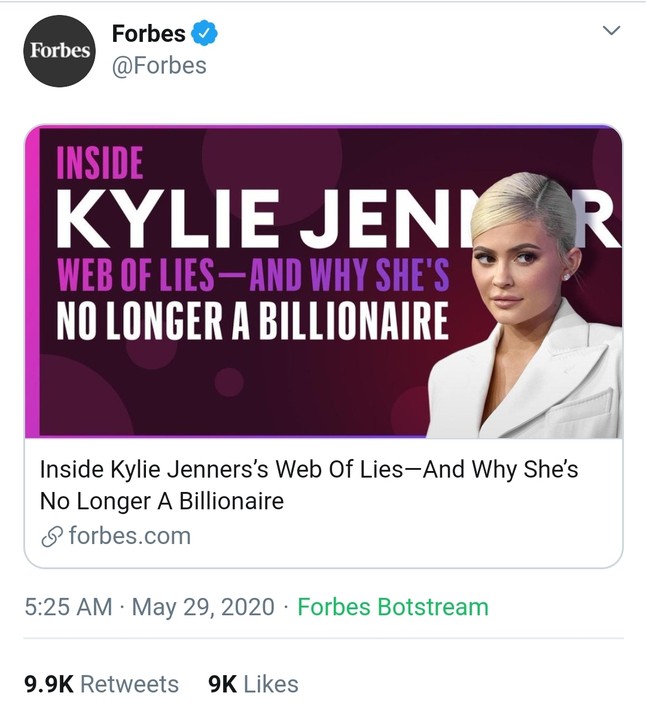 In a detailed report based on public financial disclosures, Forbes on Friday accused the family of creating a ‘web of lies’ and says Kylie, 22, has inflated the size of her business and success.

The publication accuses her of ‘lying about company figures and forging tax returns’ to be dubbed a billionaire.

Based on filings from beauty giant Coty, which acquired a 51  stake of Kylie’s makeup company in January at a valuation of $1.2 billion, Kylie Cosmetics generated revenues and profits that were far lower than the figures touted for years by the Jenner-Kardashian clan.

In a statement on Twitter, she fired back, writing:

‘What am I even waking up to. I thought this was a reputable site.. all I see are a number of inaccurate statements and unproven assumptions lol.’

She continued: ‘i’ve never asked for any title or tried to lie my way there EVER. period.’

Kylie bashed the most explosive claim in the report, that she and her publicists had shown journalists tax returns that were likely forged in order to support inflated claims of her net worth.

She tweeted: ‘that’s your proof? so you just THOUGHT they were forged? like actually what am I reading.’

Forbes explained that it had been shown 2016 tax returns indicating revenue far higher than the numbers revealed by Coty’s filing and that there were only two explanations: Kylie Cosmetics’ sales had utterly collapsed in the two years before the acquisition, or the tax returns were fabricated.

Forbes itself put Kylie on the cover in March 2019, hailing her as the youngest-ever self-made billionaire.

The move appeared to anger her brother-in-law Kanye West, whom Forbes did not declare a billionaire until April of this year.

MORE:  Kanye West officially now a billionaire according to Forbes

The magazine reported that West ‘reacted with hurt and venom’ after he was not included in its billionaire’s list earlier this year.

‘You know what you’re doing,’ he texted a Forbes reporter. ‘You’re toying with me and I’m not finna lye [sic] down and take it anymore in Jesus name.’

After he was finally added to the list, West disputed Forbes’ evaluation of his net worth at $1.26 billion.

‘It’s not a billion,’ West texted the magazine. ‘It’s $3.3 billion since no one at Forbes knows how to count.’