Real Madrid sealed their 34th La Liga title on Thursday with a 2-1 win over Villarreal at a sweltering Alfredo di Stefano in the suburbs of Madrid.

Zidane’s side have been irresistibly unspectacular since the return of football and it was in that same style that they won their 10th game in a row and marched to another trophy under their French manager.

Zidane, often almost accused of having some secret formula for success that he refuses to divulge, has done it again.

Zidane refused to let his mind drift to the possible celebrations and didn’t want to entertain the importance of the game in the grander scheme of things before kick-off on Thursday night.

“I don’t have to think about if we draw tomorrow, or on Sunday… Tomorrow, we will be going all out to win the game, as we do in every game,” he said in the press conference before the Villarreal game.

There had to be part of him that sensed something inevitable about a title win given their recent run but he wasn’t about to show that in public.

Zidane is a serial winner and this is his 11th title as the Real Madrid boss in just over four years.

The reason he left in 2018 was in part due to Madrid’s failure to win the league that year and the manner in which they lost in the Copa del Rey that year, bowing out to Leganés.

“I have always said it and I won’t change. I have said it all my life.”

There will never be a stranger league season than this one. There might never be a more satisfying league title win either though.

Madrid had 11 games left when the coronavirus brought football around Europe to an end. They had just been beaten by Real Betis and looked like a team lacking plenty.

As the weeks rolled by and football remained on hold, it became clear that Javier Tebas was planning on a LaLiga return.

Meanwhile, Madrid were planning their own comeback from the confines of their homes and felt that if they took care of their business in the remaining games, Barcelona would stumble.

That’s exactly how things transpired with Barcelona drawing with Sevilla and Atlético Madrid to hand Madrid the lead in LaLiga. Madrid never looked back. Thursday’s victory was their 10th in a row.

Karim Benzema, Real Madrid’s talisman and top scorer gave Madrid the lead with Casemiro robbing a risky Sofian Chakla pass, Modric pouncing on the loose ball like only Modric pounces on loose balls, and Benzema finished the way Benzema has been finishing all year. It was his 19th goal and 6th since the return of football. Madrid were on their way.

They wrapped it up with more of the usual suspects involved. Ramos stole in front of Gerard Moreno and raced forward before winning a penalty. Benzema slotted it home after a retake when a number of players encroached on the first effort, which saw Ramos cheekily pass to Benzema.

Madrid didn’t get to bask in their two-goal lead for long when Vicente Iborra headed home with 10 to play but as hard as Villarreal tried, they couldn’t find the leveller. They came close again with Courtois making a couple of important interventions. Asensio had a goal ruled out late but it hardly matter as Barcelona had lost at Camp Nou and Madrid were the champions regardless of what Villarreal did. 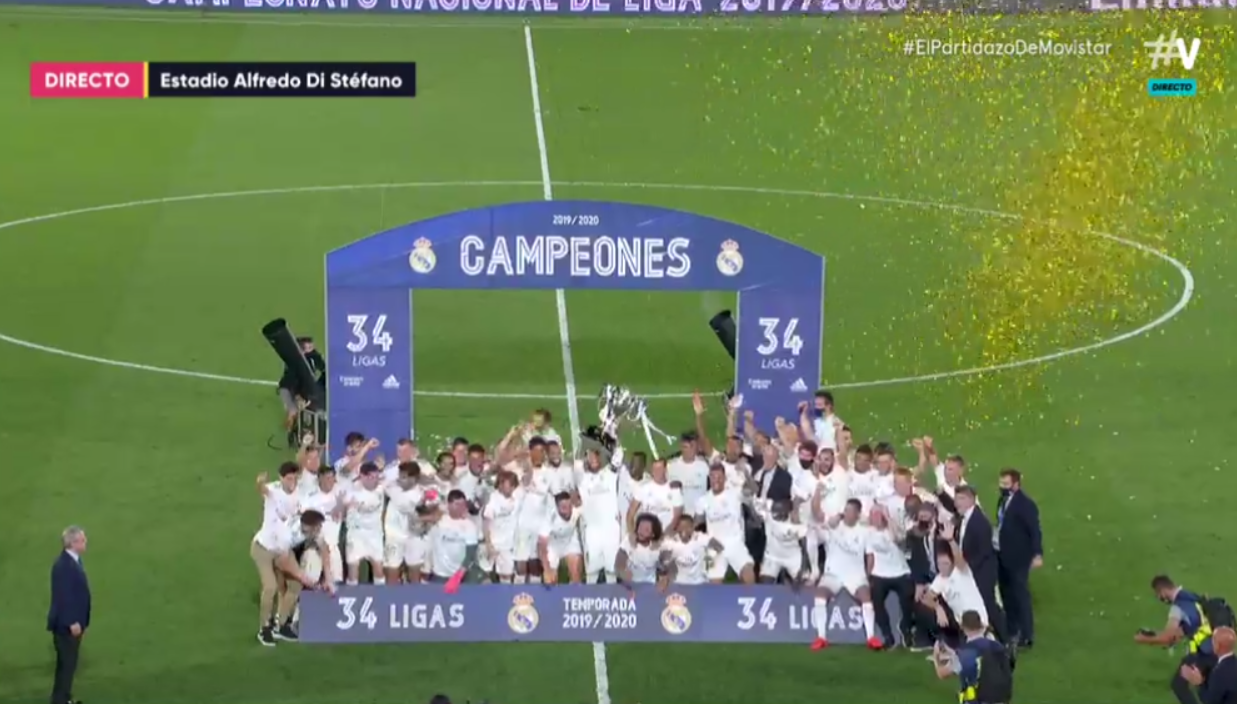 Real Madrid’s very basic strategy of winning with functional football complete with a robust defence while waiting for Barcelona to fall over themselves worked. Zidane’s secret formula has landed them another trophy and while Ramos and co. won’t be going to Cibeles to celebrate, the victory will feel all the sweeter given what they have battled through to come back after three months, go on a winning streak like they have and replace their eternal rivals at the summit of LaLiga when it mattered most.