Another set of Boko Haram terrorists has laid ambush along Monguno- Maiduguri axis as they attacked the returning convoy of Governor Babagana Umara Zulum on Sunday evening. 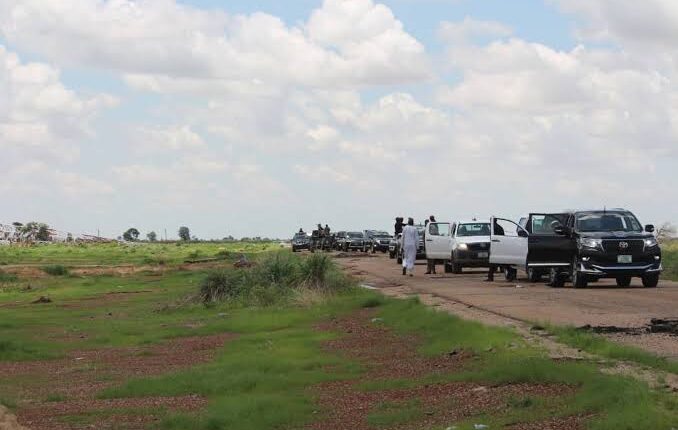 Just barely 48 hours after some members of the Boko Haram terrorists ambushed the convoy of Governor Babagana Umara Zulum along Cross Kauwa-Baga road in Borno state leaving over 30 people dead including 10 policemen and 4 soldiers, another set of insurgents laid ambush along Monguno- Maiduguri axis and attacked the returning convoy on Sunday evening.

Monguno is north and about 80km drive to Maiduguri, the town hosted thousands of Internally Displaced Persons (IDPs) mostly from Marte, Baga, Kukawa, Dikwa and other surrounding Local Government Areas.

Sources said, the attack led to the shooting of a back tyre of the vehicle/bus conveying Journalists attached to the governor, but the driver maneuvered and drove the vehicle on the flat wheel to escape the scene.

Although, details were sketchy at press time, one of the occupants/Journalists in the affected bus who did not want his name mentioned confirmed to our correspondent that the convoy ran into another Boko Haram ambush about 50km away to Maiduguri.

Unfortunately, the Journalist cell phone lines went off due to poor network, but investigation revealed that no casualty recorded in the latest Sunday ambush.