A date never truly belonging to Tyson Fury to begin with, is now off the table.

Rumors of a December 5 ring return for the lineal heavyweight champion were ultimately dismissed by the man himself, whom now seems poised to focus on an epic run in the New Year.

“The Gypsy King is returning in 2021,” Fury announced via his verified social media account on Sunday. “Only those that have supported me 100% since my comeback will be with me for the glory.”

The hulking heavyweight king from Manchester, England was linked for weeks to a December 5 headliner at Royal Albert Hall in London. Unbeaten fringe heavyweight contender Agit Kabayel was the leading candidate to land the assignment had it ever come to fruition. 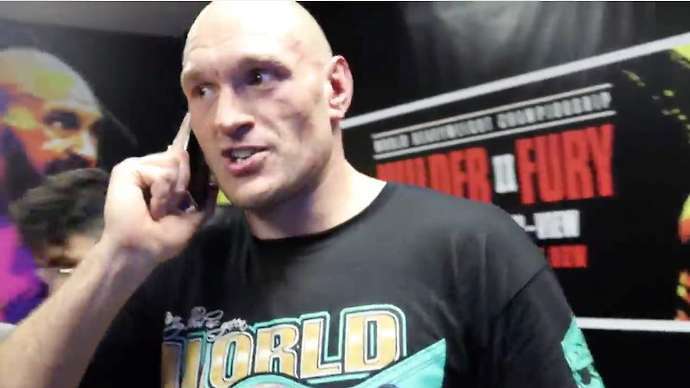 Fury (30-0-1, 21KOs) and co-promoter Frank Warren declared that he would occupy the date after losing out on the opportunity to face former heavyweight titlist Deontay Wilder (42-1-1, 41KOs) for a third time. The two were due to collide December 19 at Allegiant Stadium in Las Vegas, only for the event to be nixed by ESPN and Fox Sports—the two platforms who were to present the card via joint Pay-Per-View.

Concerns over a flood of college football games on both platforms were the cause of the date being pulled, prompting Fury to take matters into his own hands. From there came the declaration of a voluntary defense, to have aired live via BT Sport Pay-Per-View in the United Kingdom and on an unspecified ESPN platform.

As previously reported by BoxingScene.com, however, there always remained the matter of who would fund such an event which very much always left the date in limbo.

Another fight once linked to the card—a 122-pound showdown between former titlist Isaac Dogboe and unbeaten contender Michael Conlan—fell through without a formal announcement. The two sides reportedly agreed on most of the details but had yet to finalize the matchup when Belfast’s Conlan (14-0, 8KOs) landed on the injured list for the balance of 2020 after suffering an Achilles tear during a training session.

The timing of Fury’s announcement comes shortly after Wilder’s side—led by co-manager Shelly Finkel—was prepared to take the battle to court to ensure what the American continues to insist is his contractually guaranteed third fight.

The two agreed to a bilateral clause calling for the loser of their second fight to call for a third meeting following their clash this past February. Fury claimed a dominant 7th round knockout to reestablish heavyweight championship lineage, while handing Wilder his first defeat. The bout came nearly 15 months after the two fought to a questionable 12-round draw in December 2018, atop a Showtime Pay-Per-View from Staples Center in Los Angeles, which generated 325,000 buys.

ESPN and Fox Sports joined forces for the rematch, which aired live on PPV from the MGM Grand Garden Arena in Las Vegas. The event produced a live gate of nearly $17 million—a record for a heavyweight headliner in Nevada—while selling in the vicinity of 800,000 PPV buys.

The true status of a third fight—which Fury’s side claims such a clause to have expired—could also dictate whether the sport bears witness to another heavyweight superfight. Fury has teased the possibility of an all-UK showdown with unified heavyweight titlist Anthony Joshua (23-1, 21KOs), who first has to face mandatory challenger Kubrat Pulev on December 12 in London.

Whomever and whenever Fury fights next, it most certainly will not be on December 5.