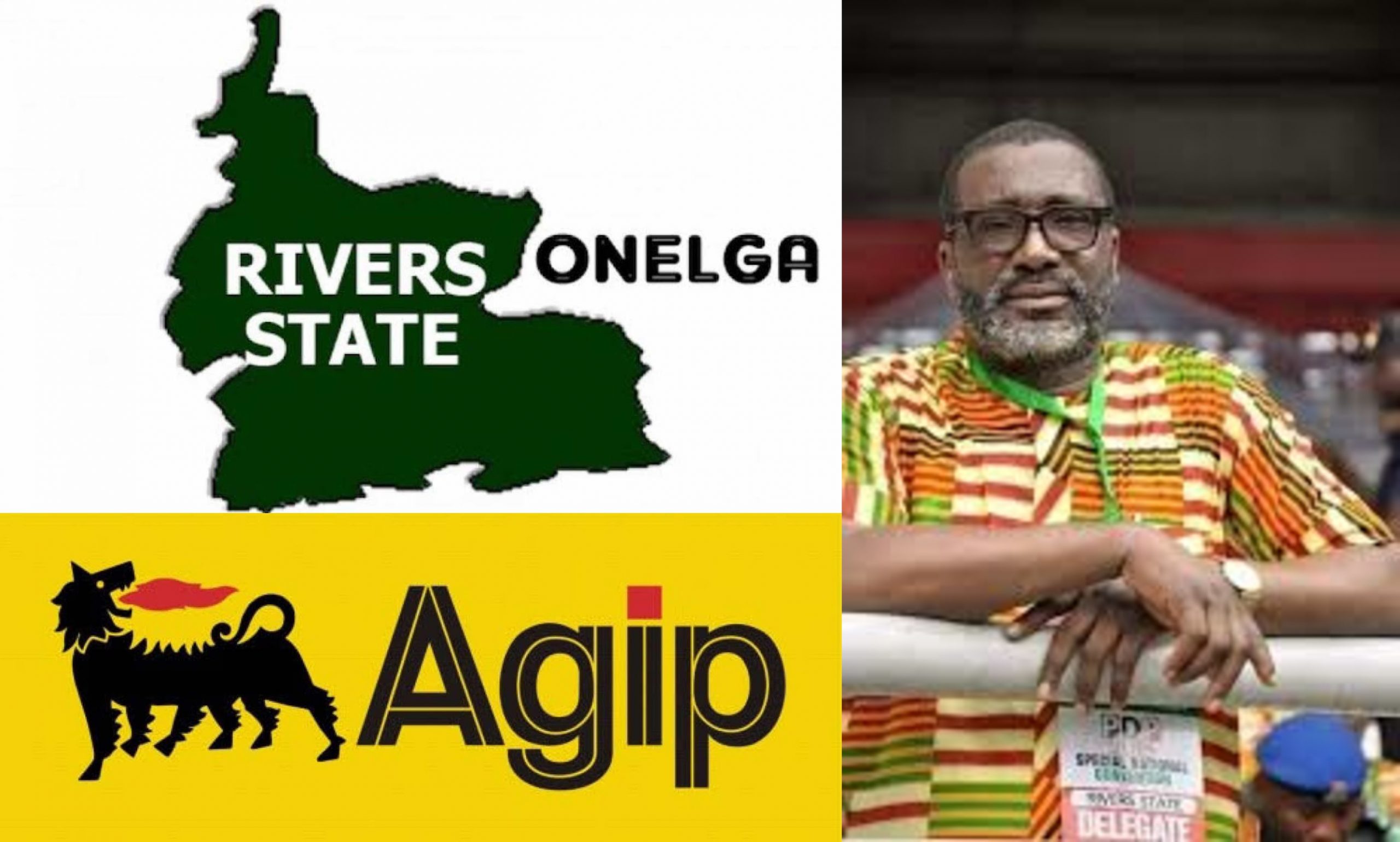 A group in Rivers State has petitioned the Inspector General of Police over “action by the Nigerian AGIP Oil Company (NAOC) and Felix Obuah” which they said is likely to breach the peace in Ogba/Egbema/Ndoni Local Government Area of Rivers State.

A letter sent to the Inspector General of Police, at Louis Edet House, Maitama District, Abuja, obtained by ASB News read below:

ACTION BY THE NIGERIAN AGIP OIL COMPANY (NAOC) AND MR. FELIX AMAECHI OBUAH LIKELY TO CAUSE INSECURITY, BREACH OF THE PEACE AND BREAKDOWN OF LAW AND ORDER IN OGBA/EGBEMA/NDONI LOCAL GOVERNMENT AREA (ONELGA) OF RIVERS STATE

We write on behalf of ourselves and other peace-loving indigenes of Ogba/Egbema/Ndoni Local Government Area hereinafter referred to as “ONELGA” of Rivers State to draw your attention to evolving issues which are clearly capable of and are indeed tending towards replication of the politically motivated killings and violence which took place in the Local Government Area between 28ᵗʰ November 2014 and 1ˢt January 2017.

May we, in furtherance of this case, present you with the following background:

a. That NAOC had been engaged in Oil and Gas prospecting am producing activities in the Local Government Area since 1962.

b. That in the course of its industrial activities, local contractors particularly in the area of surveillance had been working for the company.

c. That most of the contractors were usually nominated by oil and gas wellheads Landlord Families.

d. That there had been sustained peaceful and cordial relationship between NAOC and its host communities in the Local Government Area for the past decades until one M r. Felix Amaechi Obuah started his contractual relationship with the company.

e. That in pursuit of his personal political and economic interests, Mr Felix Amaechi Obuah, in connivance with some key managerial staff of NAOC, decided to hijack and aggregate most of the contract jobs to himself through his companies. Prominent among these key managerial staff is one M r. Dennis Masi (former Security Manager).

f. That the Said action of Mr. Felix Amaechi Obuah and sums managerial the staff of NAOC led to a series of protests in Omoku Communities in particular and ONELGA in general.

g. That in order to maintain his grip on NAOC and intimidate his opponents, Mr. Felix Amaechi Obuah, raised a group of cultists and terrorists headed by the late Mr. Ejike Ejima Igwedibia (then known as DON WANI).

h. That in the bid to protect the political and economic interests of Mr. Felix Amaechi Obuah, the late DON WANI and his gang unleashed unprecedented terror by outright killings (most of his victims were beheaded) and destruction of properties.

That the murderous activities of the late DON WANI and his gang continued until January 2017 when, upon engaging the Nigerian Security Forces, he was finally eliminated.

May we also report as follows:
a. That Mr. Felix Amaechi Obuah, in anticipation of contesting for a political office in 2023, has yet again entered into an unholy alliance with NAOC in order to accumulate the needed financial resources that will aid him to achieve his political objectives.

b. That presently the Nigerian Agip Oil Company in connivance with Mr Felix Amaechi Obuah made an unprecedented policy summersault by deciding to appoint TRACE GUARD SECURITY COMPANY which belongs to the said Mr. Felix Amaechi Obuah as its sole surveillance contractor thereby subjecting the rest of NAOC surveillance contractors to the whims and caprices of the said company.

c. That he is working in concert with the Security Manager of NAOC, Mr. Standley Umukoro.

d. That this anti-people policy change of NAOC is presently causing serious disenchantment amongst surveillance Contractors, Oil and Gas Wellheads Landlord Families and the youths of Ornoku communities in particular and ONELGA in general.

e. That in order to ensure sustenance of this policy of NAOC, Mr. Felix Amaechi Obuah is planning to use the same approach as he did between 2014 and 2017 in anticipation that this will once again subject his political and economic rivals to a state of fear and terror thereby enhancing his interests as we approach 2023.

f. That the only possible way to avert this looming catastrophe is for the Nigerian Agip Oil Company (NAOC) to out rightly cancel this obnoxious contract award to TRACE GUARD SECURITY COMPANY and immediately revert to the old order where all the sacked former contractors in ONELGA should be engaged by NAOC.

We are therefore raising this alarm with a deep sense of patriotism in the hope that Political and Security Authorities will undertake a thorough investigation into this matter in order to save the people of Ogba/Egbema/Ndoni Local Government Area, the people of Rivers State and indeed the Nigerian Nation from the catastrophe that is bound to be repeated if the right decisions and actions are not immediately taken in this regard.

Sir, please note that we have taken all due diligence and care in order not to endanger our lives and those of our families in the cause of this struggle and do hope that you will understand and co-operate accordingly.

We remain yours faithfully,
For and on behalf of other patriotic indigenes of ONELGA: 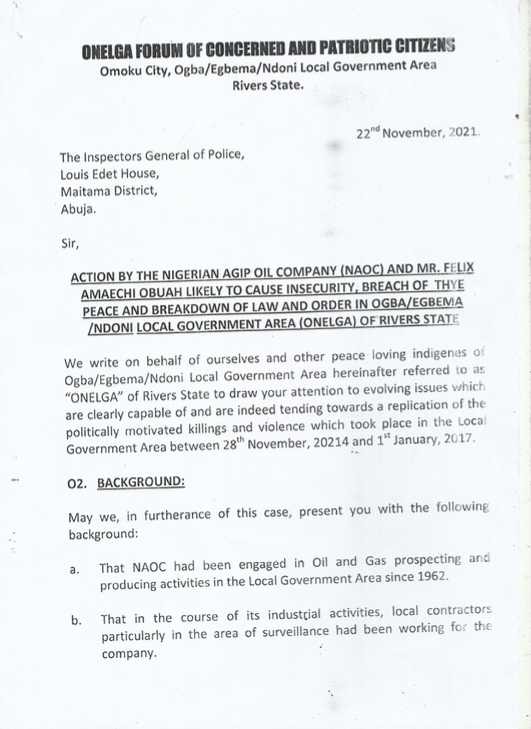 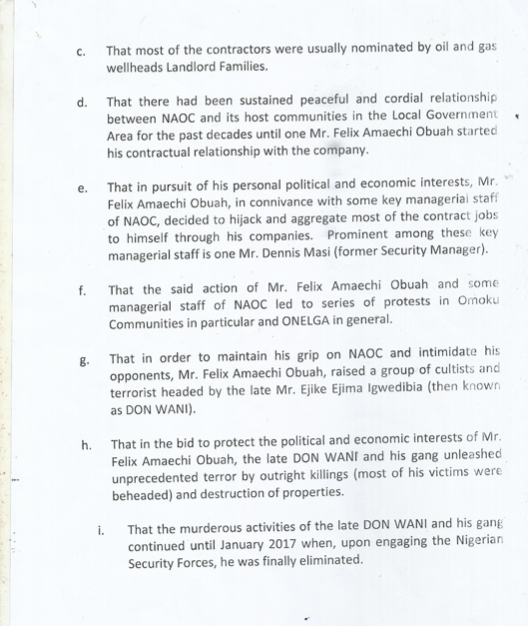 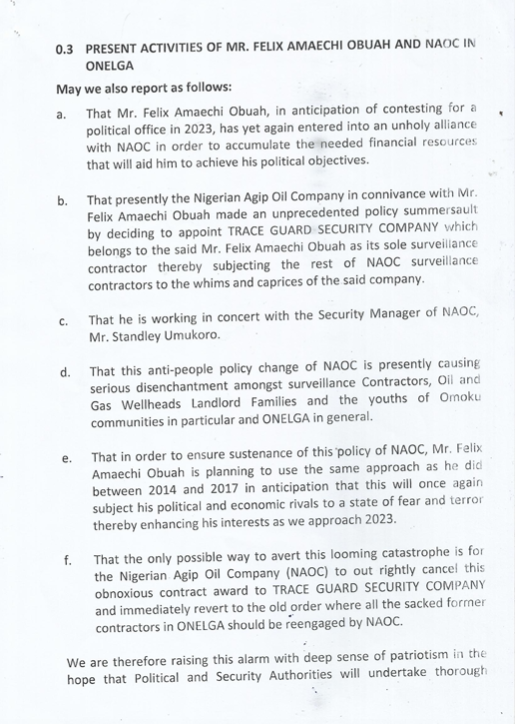 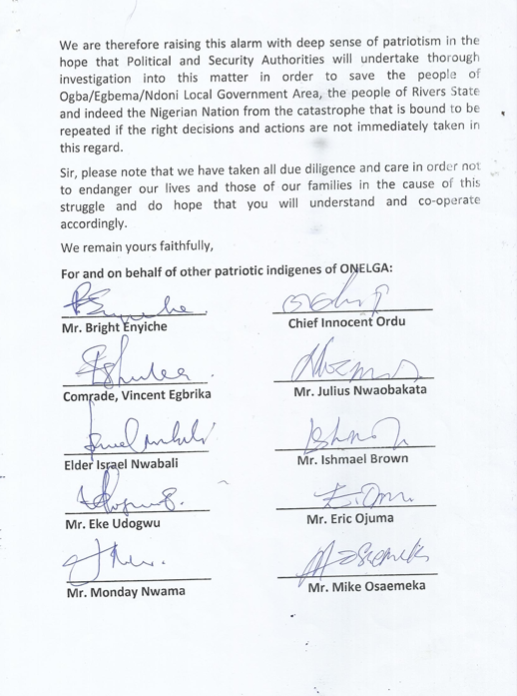