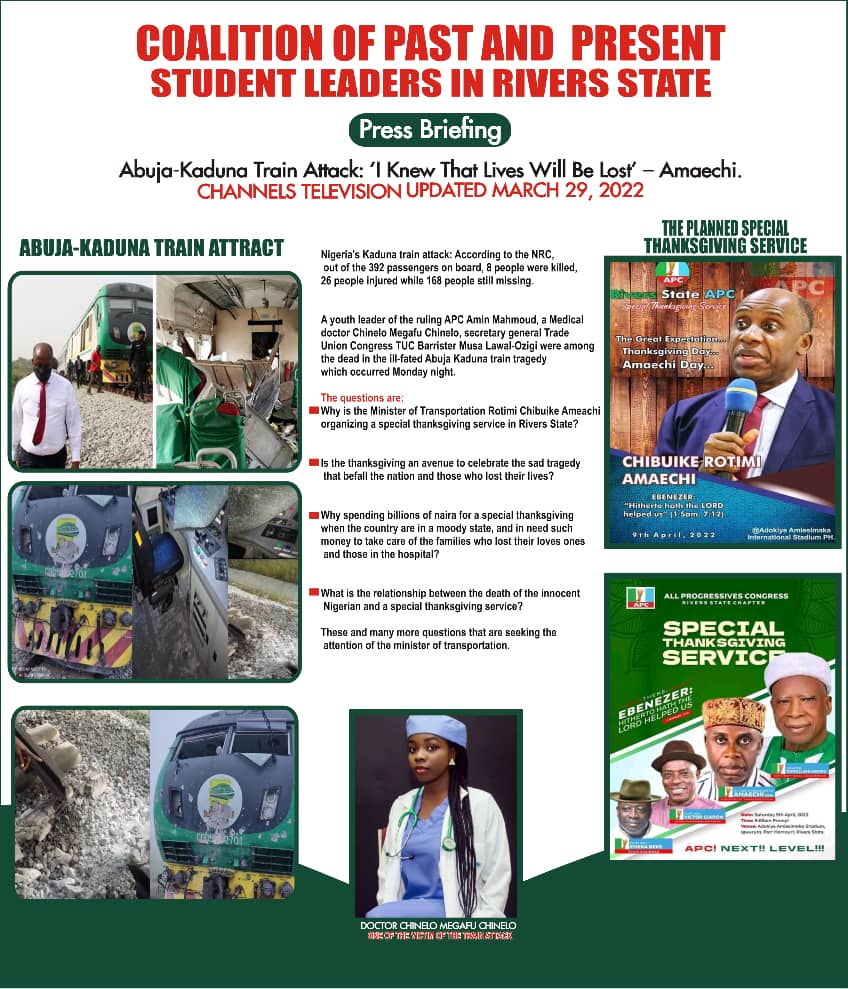 PRESS RELEASE BY A COALITION OF PAST AND PRESENT STUDENTS’ UNION LEADERS (NANS, NURSS & SUGs) ETC, IN RIVERS STATE, ON THE ABUJA-KADUNA TRAIN ATTACK.

WE, the coalition of Past and Present Students’ Union Leaders from different wings of the Aluta struggle, cutting across the National Association of Nigerian Students (NANS), National Union of Rivers State Students (NURSS), Student Union Governments (SUGs) of both federal and state-owned tertiary institutions in Rivers State, on behalf of the teeming demographics of Students’ community across the state and Nigeria at large, make this press release today being Thursday 7th April 2022, on the Abuja-Kaduna train attack, which happened on Monday, 28th March 2022.

First of all, we pay solidarity to the victims and families of the March 28th incident, hereto we make this press release.

We have observed a minute silence for the eight (8) persons confirmed dead as a result of the attack on these innocent Nigerians whose only crime was patronizing a national transport system (train), which was built with taxpayers’ money. Foremost, is our dear Dr Chinelo Nwando who was a University of Port Harcourt-trained dental surgeon. We have also offered prayers for the over 168 persons declared missing by the Nigerian Railway Corporation (NRC), even though undisputed news has it that over 970 persons boarded the train.

Saddened by this “avoidable” national disaster, we express strong disappointment in the incautious and unpatriotic disposition of the Minister of Transportation on this matter;

Recall that the Minister of Transportation, Rt. Hon. Chibuike Rotimi Amaechi had admitted that he knew this train attack would happen. whilst he glaringly pushed the blame to the National Executive Council, facts emanated so far, calls for his investigation and sack! we refer the public therefore to the leaked memo from the National Executive Council and the memos from the Kaduna State Government, warning about the unsafe state of that route, especially on night journeys.

On these wise, we are forced to agree with Mr Femi Falana (SAN) that the Minister of Transportation is Viciously liable for the tragic incident.

As concerned Nigerians, we are even more deeply shocked that in the face of this disheartening national tragedy, the Minister, Rotimi Amaechi and the All Progressives Congress (APC) are organizing a political jamboree in Rivers State, where over a billion naira is being deployed, less than two weeks after the incident where lives are lost and hundreds of persons including students, still missing. This shows how inhumane the Minister truly is.

Our thoughts are provoked to probe the rationale behind having a jamboree of such magnitude at this time when the nation is in sorrow; Families of the deceased are still mourning, captives in the den of the bandits are uncertain of coming back alive, those who escaped kidnapping are still experiencing the trauma of their lives!

Is the Minister of Transportation, Chibuike Rotimi Amaechi (CON) organizing such a heavily funded spree that:

1. Nigerians (including Students) were killed and many kidnapped on the train under his watch as the serving Minister of Transportation?

2. His ‘Monkey business’ Security surveillance Contract has been finally approved on account of this avoidable calamity to which he is liable?

It would have been noble that the Minister displays statesmanship in the similitude to his fellow Party man, Bola Ahmed Tinubu, who called off his annual birthday celebration in honour of all those who suffered the attack, even though it has been long fixed before this mishap.

As Past and Present Students’ Leaders, we thus consider it infamous that a man who rose to power via the Students’ Union Struggle, has badly represented what the Aluta struggle stands for (Injury to one is an injury to all).

We cannot justify the expediency of such a wasteful jamboree scheduled for Saturday 9th April, by the Minister of Transportation and the APC, Rather than seek ways to succour and alleviate the Families in grief.

It is widely publicized that the National Chairman of the All Progressives Congress (APC), Sen. Adamu Abdullahi is a special guest for this inordinate celebration at this moment of our national grief. We the students’ Community are watching keenly, the disposition of the National Secretariat of the APC on this, knowing fully that members of the APC are also victims of that attack.

We are aware that Our Students across the State and South-South, are being sent text messages to be at the said APC event in Rivers State, on Saturday 9th April 2022, for a paltry amount of Two thousand Naira (#2,000) per student. We are further exasperated that our Constituency (the Students’ community) of particular concern is dragged into this sham.

We, therefore, admonish all Students under our watch, to dissociate themselves from such illicit gatherings as it offends our humanity and bond as unionists.

We insist that in good conscience and respect to the victims of our dear country on the train attack, that reason prevails, and steps retraced immediately.