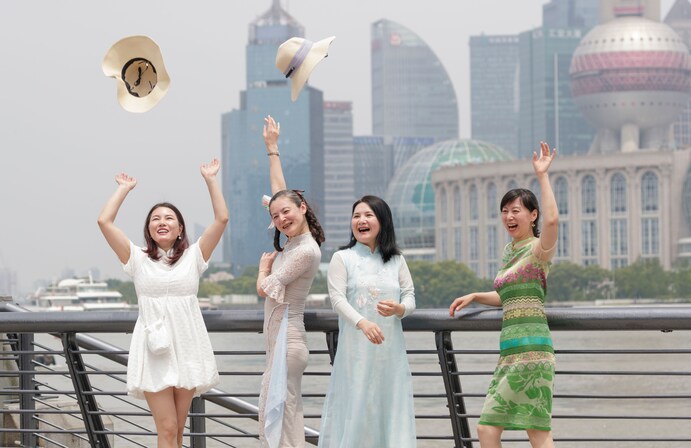 Shanghai a big city in China that have being in lockdown for two months after the Omicron virus surfaces heavily, with new cases rising rapidly.

June 1st was indeed a day for celebration as the people of Shanghai come out for the first in two long months.

” This is a moment that we have been looking forward to for a very long time”, The Shanghai Government said in a statement on social media.

On Wednesday morning a city with about 25 million people was able to go about its regular routine after some restrictions have being relaxed. Some people were also seen travelling on the subway, shops were opening as well as company staff were heading to their offices.

The lockdown had a big toll on the economy of the city as staff were forced to stay home. Though things have not all gone back to normal but malls, and schools can reopen slowly.

There is still no room for relaxation, China has still continued with a Zero-Covid Strategy, which includes quick lockdowns, mass testing, longer quarantines and other activities needed in order to get rid of the virus.

People are seen on the streets with their nose masks practising Tai Chi after the lockdown was lifted from the largest city in China.

” We will return life and businesses to normality,” The Shanghai communist party committee said in a WeChat statement. The authorities have also announced that students in high and middle school will begin fully on June 6th as they return back to their classrooms.

Though most of the Shanghai people are free to move around freely in their neighbourhoods there are still about 17 more surrounding neighbourhoods in the city on tight lockdown.

The Chinese Premier Li Keqiang warned last week that the economy will struggle to grow this quarter and may miss its projected target this year just as Bloomberg Economics reportedly predicted, stating that the US economy will outpace that of China for the first time since 1976.

Prior to the lifting of the restrictions, as of may 31st night, residents of Shanghai were seen on the streets drinking and celebrating as they prepared for their freedom the next day.

” The mood tonight is a bit like high school days, on the eve of the school year I was full of expectations for the new semester but I feel a little uneasy in my heart”, wrote a user on the Twitter-Like Weibo.

An interviewed lady expressed her happiness. ” I walked the dog and the dog is pretty excited because it has been a long time for it to come outside”, said Melody Dong.

Though residents are still mandated to wear masks in public places and social gatherings must be strictly avoided. Restaurants remain closed, while gyms are set to reopen later.

A 72-hour testing policy may become the new normal in many Chinese cities including Shanghai, as it is mandatory to test in order to either take public transportations or other venues with close contact with people.

“The Shanghai government needs to make a public apology in order to obtain the understanding and support of the people of Shanghai and repair the damaged relationship between the government and the people”, Qu Weiguo, A Professor at Fudan University’s School Of Foreign Language posted on WeChat.

Shanghai recorded 31 new cases as of Monday, this was a positive sign as against the 20,000 new cases per day recorded in April.

China says its approach, a signature policy of President Xi Jinping, is needed to save lives and protect its healthcare system.